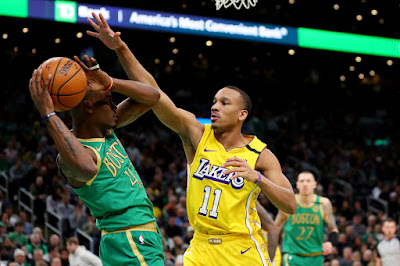 Los Angeles Lakers guard Avery Bradley has opted out of playing in Orlando during the NBA's resumption of the 2019-20 season.


Bradley and his wife, Ashley have three children and the decision to not head to Disney World to finish the season and join the Lakers was based around their oldest child, Liam.

Liam Bradley is six years old and has a history of struggling to recover from respiratory illnesses, and it may have been unlikely that he'd be medically cleared to enter the Orlando bubble at any point.


"As committed to my Lakers teammates and the organization as I am, I ultimately play basketball for my family," Avery Bradley said in a statement to ESPN. "And so, at a time like this, I can't imagine making any decision that might put my family's health and well-being at even the slightest risk.

"As promised also, I will use this time away to focus on the formation of projects to help strengthen my communities."

Bradley and Kyrie Irving, were co-leading the players coalition that believed several issues centered around social justice and racial equality should be addressed with the National Basketball Players Association and NBA prior to the league's restart. The two former Celtics guards did not want to take away from the Black Lives Movement that has picked up steam since the death of George Floyd.

Bradley is averaging 8.6 points and 2.6 rebounds in 49 games (44 starts) for the Lakers this season, as he is one of the reasons they have the best record in the Western Conference at 49-14 heading into the 22-team restart format in Orlando next month.

While it appears that Kentavious Caldwell-Pope will mostly start in Bradley's place, the Lakers are reportedly looking at free agent JR Smith as a leading replacement player candidate, according to ESPN.

Bradley, who will lose approximately $650,000 in salary by sitting out, is a 10 year veteran that has averaged 11.8 points per-game while playing for the Celtics, Pistons, Clippers and Grizzlies.