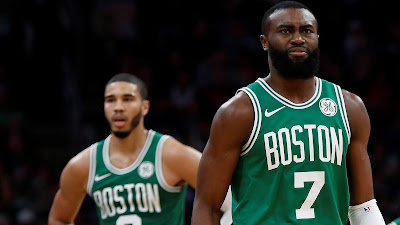 While the NBA is still just over a month away from resuming the 2019-20 season, Celtics guard Marcus Smart spent some of his downtime on social media over the weekend.

Smart decided to host an impromptu Q&A session on Twitter late Sunday night or early Monday morning, depending on how you look at it, as the Celtics veteran opened up to fans and many responded.


Smart answered serious questions about current and former Celtics teammates, such as Terry Rozier and even Daniel Theis got some love. Smart even went as far as saying "the moon" is the ceiling for All-Star Jayson Tatum and Jaylen Brown.


The unofficial Celtics captain also believes Tatum could be the best player in the league one day.


The 26-year old Smart revealed that he his playing pick-up games regularly and has no lasting effects from his positive COVID-19 test back in March.


With the Celtics and 21 other teams having to adjust to playing their "seeding" and playoff games without fans, Smart appears to have a solution to counter the silence at Disney's ESPN World Wide of Sports Complex.


Personally I’m thinking like one of them Scottish pipe organs after a big play and maybe they drop down like those parachute giveaway shirts and let the players catch em.
— marcus smart (@smart_MS3) June 29, 2020


Either way, Smart is clearly ready for the season to resume and reunite with his Celtics teammates to play for a championship.


The Celtics travel to Orlando next week for the official start of training camp and will tip-off their eight regular season game schedule on July 31 against the Bucks.