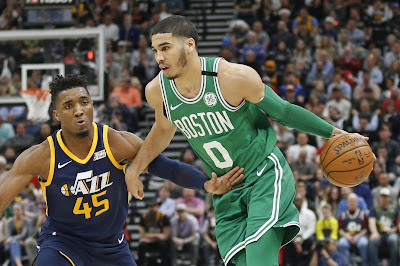 While the NBA season is still scheduled to restart, despite veterans like Kyrie Irving opposing the league's plan, a group of young stars are looking to be covered for the risks that come with months of inactivity.

With many rookie-scale contract extensions set to be offered this offseason, Celtics forward Jayson Tatum and several of the league's top young stars spoke with National Basketball Players Association officials via a conference call on Friday.

According to Adrian Wojnarowski of ESPN, Miami's Bam Adebayo, Sacramento's De'Aaron Fox, the Los Angeles Lakers' Kyle Kuzma and Utah's Donovan Mitchell were among the four that joined Tatum to talk about possible league-financed insurance to protect them against any career-threatening injuries in Orlando if the season resumes.

The five players, who are members of the 2017 NBA Draft Class, spoke with NBPA's executive director Michele Roberts and senior counsel Ron Klempner about the increased risk of injury or the COVID-19 illness after more than a three-month suspension of play and a shorten training camp -- which has raised concerns since they're all eligible for contract extensions.

The NBPA and NBA are still negotiating details on terms to the collective bargaining agreement before the 22-team resumption plan goes into effect, per league sources.

Tatum is reportedly going to get a max-contract offer from the Celtics at some point during the rookie-scale window, which normally is between July and Oct. The All-Star forward was seen this past week putting up shots at the team's Auerbach Center, as he showed no signs of any sort of rust.

For players on the cusp of a maximum contract extension worth more than $100 million, insurance policies could cost the league approximately $500,000 to protect against the financial loss of future earnings due to a career-ending injury, sources said.

Training camp is scheduled for July 9-29, with the restart of the NBA season set to tip-off on July 30.