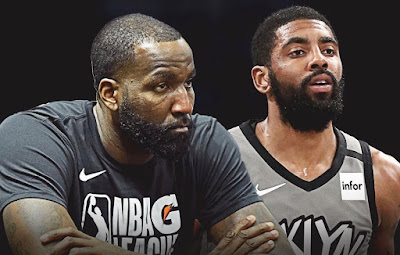 Former Celtics big men Kendrick Perkins and Ryan Hollins, now both turned ESPN NBA analysts, each had a different stance on Kyrie Irving wanting to boycott the restart of the 2019-20 season in the middle of nationwide protests for racial injustice and police brutality.

Perkins believed that Irving's statement made little to no sense, mostly due to no plan being attached, the 2008 NBA champion questioned why his former Cavalier teammate and one of the several National Basketball Players Association vice presidents was not being a leader.

Perkins was very critical of Irving, going as far as calling him out publicly on the very same platform he works for.


"If you take Kyrie Irving's brain and put it in a bird right now, guess what that bird is going to do?" Perkins said on ESPN's Get Up. "It's going to fly backwards, because Kyrie right now is confused."

Hollins not only didn't agree with Perkins' comment towards Irving, but he also called his former Celtics teammate to further discuss it.


"I got so much love for Perk," Hollins explained on Scoop B Radio Podcast this week. "Me and him called and we talked about it."

"He thought the things that Kyrie was doing were counterproductive.

"It takes a big man to apologize and even to an extend it to Kevin Durant also."


"I believe it was too far and I gave him the perspective and I loved the way that he expressed himself and I said, 'Perk, because if that comment, your whole message of what you want to push and as African Americans who have grown up in impoverished areas and in the inner city, the things that we're trying to change were deflected in the original message.'"

For Hollins, Irving's message was way more important than the actual person saying it.


"Even though that Kyrie may be going about things in a right way that we agree or don't agree, and maybe there isn't a right or wrong answer in this but we feel very strong about prejudice, racism, police brutality … we feel strong like, 'Damn bro, why do I feel different walking down the street?' Why am I always second guessing if I'm going to be pulled over if I'm wrong?"

Hollins reaching out to Perkins meant he could tell his one time teammate about being careful with the choice of his words going forward; "I challenged Perk to say it was never about the content of what you say and how you say [it]."

Though Perkins did eventually apologize to Irving for his "bird" statement, he stands behind his original opinion of the Nets guard's lack of leadership.


"Now was my bird statement a little out of character? Yes it was. And guess what? I apologized to Kyrie Irving for that," Perkins said on the Scoop B Podcast last week. "Do I agree with him saying that we all need to hold out? No I don't. I don't agree with that because I need to know a plan behind it, you see what I'm saying? That's all.

"At the time was it appropriate? Absolutely not. Now thinking back on it, no. [But] Kyrie in my eyes, in my opinion, he's confused. He's confused as a leader. I'm standing behind it."

Hollins was not the only one to say something about Perkins' comments against Irving, as Nets forward Wilson Chandler and All-Star Kevin Durant also took to social media to speak up against Perk.


"Wilson Chandler said something towards my way on Twitter" said Perkins during his interview with Brandon "Scoop B" Robinson. "I didn’t get into a Twitter beef with him. What it did was I DM'd him, and I gave him my telephone number. And I told him, "Ay man, we talk this out like real men." He called me, we did. And guess what? I understood where he was coming from, he understood where I was coming from and we hung up the conversation in good grace."

Unfortunately, the same couldn't be said when it came to Durant, who called Perkins a "sell out" in a comment on Perk's Instagram post about Irving last week.

While Hollins and Chandler were able to sort out their differences with Perkins, the strength in the 15-year veteran's character is quite clear despite there being a disagreement to begin with.


"He felt very passionate that he thought the things that Kyrie was doing were counterproductive," said Hollins of Perkins on Tuesday. "It takes a big man to apologize and even to extend it to Kevin Durant also, you know?"