Celtics tip-off their schedule vs Bucks in NBA restart 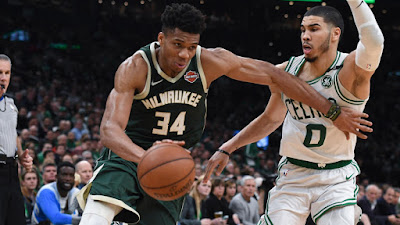 The NBA on Friday night revealed its full schedule of games as part of their restart plan in the Disney World "bubble" next month.

The Celtics and 21 other teams will play eight "seeding games" when the 2019-20 regular season resumes on July 30, in order to determine playoff positioning in each conference. The playoffs will feature its standard four rounds and a best-of-7 format.

While Boston heads to the ESPN World Wide of Sports Complex with the third best record in the Eastern Conference at 43-21, three games behind the second place Toronto Raptors and 2.5 games ahead of the Miami Heat, the Celtics will not only face those two teams but also the league leading Milwaukee Bucks -- when their eight-game schedule tips-off.

Here's how the rest of the Celtics opponents will look like (all games start times are EST):

Many NBA analysts on ESPN like Jalen Rose and Kendrick Perkins have Boston coming out of the East, even Colin Cowherd of FS1 called the Celtics NBA Finals "contenders"and believes "Jayson Tatum's the second-best player" in the conference.

Paul Pierce also joined in on the praise of his former team, going as far as saying the Celtics have the best starting-five in the league, while on ESPN's NBA Countdown on Friday.


The NBA and National Basketball Players Association finalized a deal that will have teams begin to arrive at the Disney "bubble" within the next two weeks.

Commissioner Adam Silver did acknowledge that if there is a significant spread of the coronavirus within the Disney campus, "that might lead us to stopping."

During the first week of mandatory testing around the league of those who are planning to head to Orlando, 16 out of the 302 players tested positive for COVID-19. Despite the state of Florida reportedly reaching nearly 9,000 new cases in one day, the NBA is moving forward with their restart plan.


"We know that COVID-19 will be with us for the foreseeable future," Silver said on a conference call Friday afternoon with league officials. "And we are left with no choice but to learn to live with this virus. No options are risk-free right now."

Silver believes with all that is going on in the country and around the world, whether it's racial injustice or the coronavirus pandemic -- both don't seem to be slowing down any time soon, having the NBA season come back is the right move.


"Ultimately, whether it's fighting racism or a pandemic, we're coming back because sports matter in our society," Silver said, per ESPN. "They bring people together when we need it the most and they can show how we can balance public health and economic necessity."