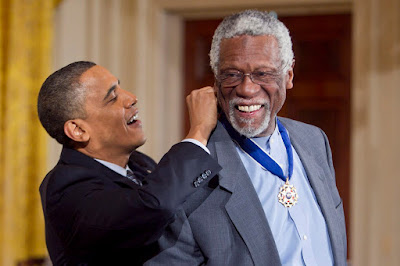 Celtics legend Bill Russell is living proof of a long-time civil rights activist that has seen it all and then some, when it comes to how black lives have been mistreated in the United States.

While young NBA stars such as Boston's Jaylen Brown and Marcus Smart have joined in the fight against racial injustice and police brutality, following the deaths of George Floyd and several others, Russell marched with Dr. Martin Luther King Jr. long before he was enshrined in the basketball Hall-of-Fame.

Today Russell finds himself witnessing the same systemic racism he had been accustomed to seeing throughout much of his 86 years on this earth, despite decades of using his biggest platform; being a professional athlete to stand and protest.

The Celtics icon has felt the need to speak out again, as Russell decided to use the Boston Globe to jot down his thoughts in light of the nation's social unrest, that seems all too familiar:

#Trump you projected your narrative that #TakingAKnee is disrespectful & #UnAmerican it was never about that! You are divisive & a coward. It takes true courage 2 stand 4 what is right & risk your life in the midst of a #pandemic #Proud2kneel #BlackLivesMatter @MSNBC @BostonGlobe https://t.co/nhNITHSrxo pic.twitter.com/h0PuUYVFwu
— TheBillRussell (@RealBillRussell) June 7, 2020

It's the kind of strange that leads to fighting each other instead of the system, that often attacks those who speak out instead of those who commit injustices. It's the kind of strange that accepts an inept and cowardly president who caters to white supremacists. It's the strange voice that condemns those brave enough to kneel during the American anthem until America lives up to its unfulfilled promise, but rationalizes the behavior of a racist who kneels on a Black man's neck for 8 minutes and 46 seconds until the life is choked out of him.

Let me remind you of that unfulfilled promise, the one right there in the Declaration of Independence: "All men are created equal" . . . "they are endowed by their Creator with certain unalienable rights, that among these are Life, Liberty, and the pursuit of Happiness."

I've been waiting my whole life for America to live up to that promise and the fact that it hasn’t, that in America the systemic and pervasive killing of Black and brown people has never been strange in the "out of the ordinary" sense of the word, but only in the "uncomfortable and ill at ease" sense of the word, adds up to nothing less than, in the words of that Billie Holiday song again, a strange and bitter crop of injustices, with bulging eyes and the twisted mouth, for the rain to gather, for the wind to suck, for the sun to rot, for the tree to drop.

Yet, I am heartened by the waves of Black Lives Matter protesters risking their lives to march among our streets.

#Trump you projected your narrative that #TakingAKnee is disrespectful & #UnAmerican it was never about that! You are divisive & a coward. It takes true courage 2 stand 4 what is right & risk your life in the midst of a #pandemic #Proud2kneel #BlackLivesMatter @MSNBC @BostonGlobe https://t.co/nhNITHSrxo pic.twitter.com/h0PuUYVFwu
— TheBillRussell (@RealBillRussell) June 7, 2020


I am heartened by the Minneapolis City Council's pledge to dismantle the Minneapolis Police Department in response to their protests. And I sincerely hope that these kinds of strange days are forever behind us, and that real, lasting change will finally be realized. Our lives depend on it."