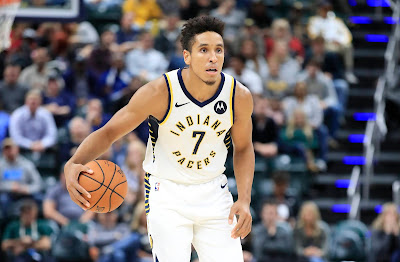 Indiana Pacers guard Malcolm Brogdon has tested positive for COVID-19, according to a statement he released on Wednesday afternoon.

The Athletic's Shams Charania first reported the story on Twitter about the 2017 NBA Rookie of the Year's positive test.


"I recently tested positive for the Covid virus and am currently in quarantine," his statement said. "I'm doing well, feeling well and progressing well. I plan to join my teammates in Orlando for the resumption of the NBA season and playoffs."

Brogdon, 27, is averaging 16.3 points, 4.7 rebounds and 7.1 assists for the Pacers in 48 games during the 2019-20 campaign. He had missed the last three games prior to the season being suspended with a hip muscle injury.

The Pacers are 39-26, as they prepare to be one of the 22-teams that are heading to Orlando in July to restart the season.

Over the last few weeks Brogdon has been an advocate for social justice, joining Celtics guard Jaylen Brown during a peaceful protest in Atlanta last month. He's one of the members of the NBPA committee that joined a group of players on Tuesday -- when they met with the league to discuss how the NBA plans to tackle systemic racism once the season resumes.

Brogdon believes players will have a voice on one of the biggest platforms when it comes to taking a stand against racial injustice and police brutality.


"Everybody going to be watching us," he said recently on JJ Redick's podcast. "We have all the cameras. There are no other sports on. Everybody wants us to play right now, and that means everybody's going to be watching. There's only 22 teams that are going to be there. And, as you go, if your team advances to the second or third round of the playoffs, the attention on you and your platform ... it actually grows the [longer] you stay in Orlando. So that's definitely a perspective I want guys to think about and understand before they make a decision."