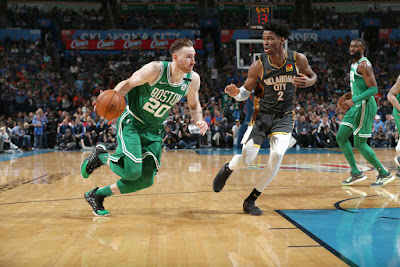 While the Celtics 112-111 win over the Oklahoma City Thunder Sunday afternoon came right down to the wire, Boston clearly displayed many strengths, but also a few weaknesses that still may be a concern.

Here are a few takeaways from both sides of the coin when it came to the Celtics double-digit comeback win at Chesapeake Energy Arena.


The Celtics starting five appear to have it all. They can isolate, hit 3-pointers, drive into the paint, rebound the ball, defend inside and on the perimeter. If healthy, they will be a nightmare for opponents in the postseason.


Hayward came away with 13 points, 10 rebounds and four assists in the game, while hitting 5-of-10 from the field and 2-of-4 on 3-pointers. He is very clever and is almost always in control, often seeming to be thinking one or two plays ahead of everybody else.


Adams finished with only four points on 2-of-10 from the field, while adding 11 boards. This was a test for Enes Kanter (four points, eight rebounds in 18 minutes) and Daniel Theis against one of the most-physical players in the league, and they held their own. Theis had a solid game, scoring 13 points, grabbing 11 rebounds and passing off for four assists. It is also noteworthy that Theis had no blocks in the game, but his intimidation under the hoop was key in Dennis Schroder missing on three drives to the basket in the second half.

Asked Daniel Theis what it's like going up against Steven Adams. He said, "He's like a tree – you can't move him."

The score was 111-108 in favor of the Celtics with just over five seconds to play and the Thunder with the ball. Smart's steal was clean and vital for the win, something he's does what seems like all the time at crucial moments of a game. Smart finished with four steals in 22 minutes off the bench.


Celtics reserves Marcus Smart, Grant Williams, Enes Kanter, Brad Wanamaker and Romeo Langford combined for only 16 points versus the Thunder. Oklahoma City certainly exploited Langford's inexperience, going right at him time after time. Langford needs to learn not to go for fakes, as the rookie picked up three fouls in only five minutes of action.


Celtics fans should be glad that Thunder marksman, Danilo Gallinari, never got traded to the Miami Heat prior to the NBA trade deadline. He gave the Celtics defense trouble all game, posting up and hitting the long-ball. He ended up with 24 points on 8-of-14 on field goals, 3-of-6 on treys and 5-of-6 from the charity stripe.


Boston was 16-of-36 from beyond the arc in this one, and it worked - barely. The Celtics still rely too much on the long-ball to win games. That works if the shots are falling, but they need to take it to the rim more often.