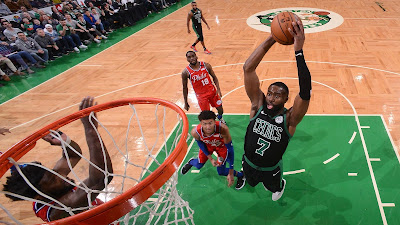 With many "NBA All-Star snubs" complaining over the past couple of days, Jaylen Brown decided to let his game do the talking, as he led the Celtics to their third straight win in a 116-95 blowout of the rival Philadelphia 76ers at TD Garden on Saturday night.

Brown led all scorers with a game-high 32 points on 13-of-23 shooting and 9 rebounds, while providing the home crowd with a few highlight dunks to boot. The Celtics guard is focused on what he hopes will be a long playoff run.


"Ain't no reason to cry over spilled milk," he said about not making the All-Star team. "Playoffs is on my mind. That's the stage you want to be on. I think some people have got it backwards."

Jayson Tatum was voted as an All-Star reserve and finished with 25 points (3-of-6 from 3), including an emphatic dunk on former teammate Al Horford ( 9 points, 9 rebounds). Marcus Smart, who started in place of Kemba Walker (hip), added 16 points (4 rebounds, 4 assists) for the Celtics and avoided a four-game regular season sweep of the Sixers.


"I haven't played as well against Philly as I would have liked the first three times, said Brown, who scored 20 points combined in the previous three meetings against the 76ers this season. "So tonight I wanted to make sure I left my imprint on the game."

Brown is averaging all career-highs so far in points (20.1), rebounds (6.6) and assists (2.4), but was not named an Eastern Conference All-Star reserve when the names were announced on Thursday.

Ben Simmons, who was also named a reserve, lead the Sixers with 23 points and Furkan Korkmaz added 14 points, while Joel Embiid was held to 1-of-11 from the field for 11 points and 5 rebounds in 23 minutes of playing time.


"He's not going to have the kind of night very often, said Celtics coach Brad Stevens. "He's an unreal player, and obviously we have the utmost respect for him. Probably more 'one of those nights' for him than anything we did."

Philadelphia shot 21.2 percent from beyond the arc and only 36.9 percent overall from the floor, as they've lost three of their last five games and are now 31-19 with the sixth best record in the East.

Boston trailed 7-6 to start the first quarter before they went on 15-2 run and never looked back. The Sixers got within eight by halftime (59-51), but the Celtics used a 12-1 spurt in the third to push their lead 71-53 and Philadelphia failed to get closer than 13 the rest of the way.

The Garden faithful of course started chanting "We want Tacko" throughout the third quarter, but Stevens held off until about 2:32 left in the final frame to insert the rookie Tacko Fall, as the crowd erupted to cap off the night.

Brad Wanamaker (15 points) and Semi Ojeleye (11 points) led Boston's bench, which outscored the Sixers' second unit 34-31. Enes Kanter missed his fifth straight game with a hip-contusion, there is no word on when he'll possibly return to the court.