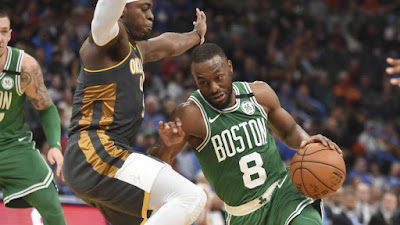 The Celtics went toe-to-toe with the hottest team since Thanksgiving not named the Milwaukee Bucks on Sunday afternoon. After a double-digit comeback, they had to hold off a late rally to beat the Oklahoma City Thunder 112-111 at Chesapeake Energy Arena and win their seventh straight.

While Kemba Walker (27) and Jayson Tatum (26) both combined for 53 points to lead the Celtics to victory, it was Marcus Smart who had the play of the game when he stole the ball from Shai Gilgeous-Alexander with 5.8 seconds left to help secure the win.


"I didn't even want to give them an attempt to even get a shot up and a chance to tie the game or come close it it," said Smart, who finished with 7 points and 4 steals on the afternoon.

Jaylen Brown (ankle) returned to the lineup after missing Friday night's match-up against the Hawks and added 17 points for the Celtics, who hit 16-of-36 from behind the arc (44.4 percent). Smart hit one of those 3's with 8:19 left in the fourth, giving Boston the lead for good down the stretch.


"Good, tough teams," Celtics coach Brad Stevens said. "A lot of smart basketball and then we almost gave at the end. But, you know, up to that point I think we played really hard and really well."

Danilo Gallinari and Gilgeous-Alexander had 24 points a piece for the Thunder, while Chris Paul and Dennis Schroder both scored 22 points each, as Oklahoma City got their four-game winning streak snapped.

The Celtics trailed 61-52 at halftime before Tatum got going in the third and pulled within 70-68 with 7:38 left in the period.


"It took a lot of grit," Tatum said. "They are a really good team. They are tough and they compete, so we just had to match their intensity."

Oklahoma City trailed 109-101 in the final frame and used a 7-2 run and cut the deficit down to three with 16.8 seconds left. The Celtics had the ball, but Hayward's layup was blocked by Shroder and Smart ripped the ball back from Gilgeous-Alexander before he had a chance to square up and possibly hit a game-tying 3-pointer.


"I saw an opportunity to make a play, and I made it," said Smart.

Despite Paul hitting a 3-pointer at the buzzer, it was Smart's huge defensive play that clinched the win for Boston.

The Celtics (37-15) will travel to Houston to face the Rockets Tuesday and then return to TD Garden to host the Los Angeles Clippers on Thursday night before they're off for the All-Star break.