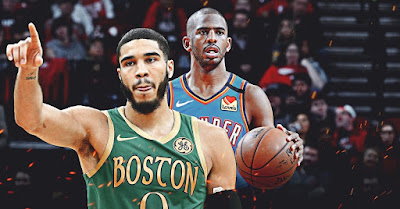 Jayson Tatum enjoyed his first NBA All-Star Game experience this past weekend, especially when it came to talking with his fellow All-Star teammate, Chris Paul.

The Thunder guard became a 10-time All-Star this season after missing the NBA's midseason classic the last four straight years, as Paul finished with 23 points and 6 assists off the bench and was huge part of Team LeBron beating Team Giannis 157-155 Sunday night in Chicago.

Tatum grabbed some tips from one of the greatest leaders of all-time during the fews days they spent together.

"It's real cool, especially coming from Chris," Tatum, who scored six points for Team LeBron, told NBC Sports Boston. "He's been a really good player for a really long time; I'm trying to be like that, too."

"He didn't show me everything. But he showed me a couple things. I'm gonna try and use that next time we play."

The Celtics beat the Thunder in Oklahoma City just a week prior to Sunday's All-Star Game and Tatum recorded a double-double of 26 points and 11 rebounds to hold off Paul (22 points, 5 rebounds and 5 assists) and the home team's late fourth quarter rally.

The Celtics forward is slowly starting to gain respect from NBA veterans, as Tatum used this past weekend to get to know his counter parts around the league and pick their brains.

Boston is currently 38-16 and a game and a half behind the Toronto Raptors (40-15) with the third best record in the Eastern Conference, as the Celtics will begin their west coast trip on Friday in Minnesota