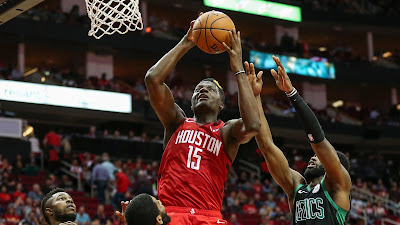 The Houston Rockets are looking to trade big man Clint Capela and the Celtics are one of the several teams interested.

According to ESPN's Adrian Wojnarowski, Boston has engaged in trade talks with Houston that involves a possible first round pick, a wing and a center for Capela.


Sources: The Atlanta Hawks remain a possible landing spot for Capela too. Rockets are pursuing first-round picks to flip into a deal for a wing player and another center. Robert Covington and Andre Iguodala are among several Houston targets. https://t.co/uWXqPqEx6T
— Adrian Wojnarowski (@wojespn) February 3, 2020


Bobby Marks of ESPN reported, that while the Celtics have as many as three first round picks in this year's NBA Draft, they would need to send back at least $10 million in salary to the Rockets in order to acquire Capela.

NBA reporter Brian Windhorst appeared on "The Lowe Post Podcast" to discuss what a possible trade between the Celtics and Rockets could possibly look like in order for Capela to land in Boston.


Windhorst discussed Capela to Boston on the Lowe Post:


Kevin O'Conner of The Ringer noted on Monday night that the reason behind the Rockets wanting to rid themselves of Capela is mainly because they're one of many teams interested in the Minnesota Timberwolves wing Robert Covington.


"Acquiring Covington isn't simple for the Rockets; they'd need to find a third team for Capela," O'Connor wrote. "Atlanta, Boston, and Brooklyn are among the teams that Houston has approached for the center."

O'Conner also writes: "The Celtics have a top-six-protected first from the Grizzlies that will become unprotected next year that they could dangle in a trade ... as well as rookie wing Romeo Langford."

While Danny Ainge does believe that the Celtics may have "too many young guys," he also insists that his coaching staff is very pleased with their three-man rotation at center so far this season with Daniel Theis, Enes Kanter and Robert Williams III, who hasn't played since December 6th.

Kanter returned to the lineup in the Celtics win over the Hawks Monday after missing the previous five-games with a hip injury, while Theis sprained his right ankle in the third quarter and is listed as day-to-day.

Though O'Conner writes that the Hawks is the "most likely" destination for Capela, a lot can change in the upcoming days.

The NBA trade deadline is on Thursday at 3 pm EST.