Is it time to bring Isaiah Thomas back to Boston? 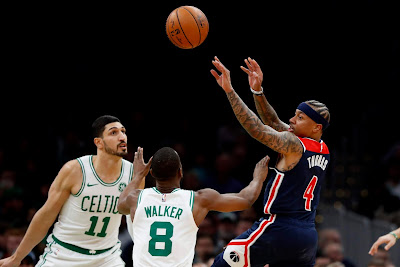 I am not broaching the idea of Danny Ainge bringing Isaiah Thomas back to Boston without having given the thought a lot of consideration.

Thomas played his best ball in the 2016-17 season during a time which must have been the low point in his life, dealing with the death of his sister and a persistent hip injury.


Isaiah Thomas on if he would be open to playing for the #Celtics again.

“For sure, if the opportunity presented itself. I hold no grudges, and they know that. I have genuine love for Boston. If that were to happen, I’d love to be part of what they have going on. You never know.“ pic.twitter.com/JK4yaJp2Ab
— Celtics Direct (@CelticsDirect) February 21, 2020


In 40 games this season for the Washington Wizards, IT produced 12.3 points per game in 23 minutes of floor time, while adding 3.7 assists per-contest. He shot 41-percent on both field goals and 3-pointers and 82 percent from the free throw line. He was traded to the Los Angeles Clippers and subsequently waived, making him a free agent.

What Thomas lacks in height, he makes up for in his mental toughness. He is a savvy veteran who can score points in bunches and create for others. He knows Brad Stevens' system and many of the current cast of characters. He would come to the Celtics, not as a leader this time - but as a substitute off the bench who can supply a spark - and points - in the postseason.

After a tough loss to the Lakers on Sunday, plus injuries to the back and frontcourt all season, Ainge is obviously taking his time with potential acquisitions from free agency. If he does anything at all, he wants the right guy. Thomas has been humbled mightily since his "back up the Brinks truck" days in Boston. The truck never arrived for him, but a championship ring may be satisfactory compensation for a sad and disappointing last several years.

This is not simply about creating an uplifting fairy tale. Danny Ainge once sent Antoine Walker packing, but later brought him back to Boston via trade - after Toine called Danny a "snake" for dealing him away. Ainge then sent Walker to the Miami Heat, where he won his only championship in 2006.

Ainge traded Thomas to Cleveland in the deal that brought Kyrie Irving to Boston. Beyond a kind gesture, reacquiring IT in free agency would give the Celtics a better shot at a title. The present Celtics team has proven tough defensively, and quite capable of covering Thomas' liabilities on that end of the court. A cut from the present roster would have to take place, and Vincent Poirier, although having a guaranteed $2.6 million for next season, might be the casualty.