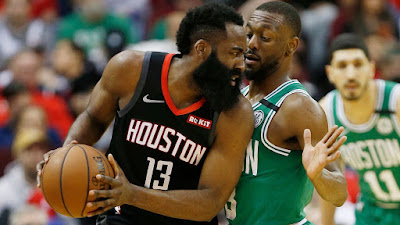 Mike D'Antoni's experiment employing his deadly duo of Russell Westbrook and James Harden to continually attack Boston's defense worked like a charm, giving the Houston Rockets the 116-105 win over the Celtics.

Here are 10 takeaways from Tuesday night's contest at the Toyota Center.

1. Boston had no answer for Russell Westbrook and James Harden

The Houston duo combined for 78 points, 18 boards and 12 assists. Westbrook, who shot 13-of-23 from the floor for 36 points (10 rebounds, five assists), was able to get to the rim repeatedly, either scoring or picking up a foul on most of his drives. Harden finished with a game-high 42 points on 9-of-19 shooting to go along with eight rebounds and seven assists. The two guards shot a total of 31 free throws and made 27 of them, with Harden going 17-of-18 from the charity stripe.

Westbrook, particularly, benefited from Mike D'Antoni's small-ball experiment, as without a Rockets big man clogging the middle, he had his way with any Boston defender trying to stop him.

Kanter played a mere eight minutes in this one, missing his only two shot attempts - creating two turnovers and picking up two fouls. The Celtics big man had trouble countering P. J. Tucker's toughness underneath and working Stevens' switching defense against such a small-ball lineup. Daniel Theis on the other hand, seemed to adapt quite well notching a near double-double of 11 points, while also getting to the free throw line five times (5-of-5) and pulling down nine rebounds.

3. Celtics defense was decent, but the offense was stagnant

Boston shot 85 times for 43.5 percent shooting and simply did not move the ball around more, often settling for one or two passes then letting it fly, especially from behind the arc -- Celtics were 11-of-32 from 3. Despite 24 assists on 37 made baskets and outscoring the Rockets 46-38 in the paint, Stevens did acknowledge that Houston's physical brand of defense may have played a role in disrupting their offense overall.

4. Celtics 18 turnovers contributed to the loss

Boston, who ranks eighth in turnovers for the season at 13.8 per game, committed nearly five more than their average and it lead to 17 fast break points for the Rockets. They were clearly frazzled by Mike D'Antoni's offensive and defensive schemes.

Brown did have a decent game, scoring 19 points on 8-of-14 from the field and 4-of-8 on 3-pointers, but he only grabbed three boards and passed off for one assist. He also had a team-high five turnovers before being kneed in his right calf and exiting game late in the fourth. It may be time to shut him down to heal with the All-Star beginning this weekend and take advantage of at least eight days off to rest up

Tatum, who is the reigning Eastern Conference Player of the Week, came away with 15 points, nine rebounds, four assists and four steals, but he shot only 33 percent (5-15) from the field, while missing all seven of his treys. He also picked up a few fouls going for pump fakes against Harden. Tatum had been averaging close to 30 points during the Celtics seven game win streak, looked like he simply was tired and forcing up shots at times.

7. Gordon Hayward is the stabilizing influence for Boston

Hayward doesn't make many errors, as he usually makes the right pass, grabs key rebounds and shoots the ball in the right situations. He came away with 20 points, eight rebounds, six assists and only two turnovers. He seemed to be one of the few Celtics players not frazzled by Houston's small-ball schemes, especially when ran the point-forward duties for the struggling Kemba Walker, who went 5-of-17 from the floor overall, including 1-of-6 from 3 for 14 points.

8. Brad Wanamaker making a mark as a solid substitute

Wanamaker had another fine game, scoring 11 points on 5-of-9 on field goals and 1-of-2 from beyond the arc. He added three assists and two steals, and came away with team-high plus/minus (players with double-digit minutes) of +7. Marcus Smart finished with eight points, five assists and four rebounds and was a +1 to round off the second unit backcourt duo.

9. Grant Williams has the physique and toughness to match Houston's P. J. Tucker as a small-ball center

Williams was another bright spot off the bench, as he grabbed four rebounds in only eight minutes of action. He also scored seven points, going 4-of-4 from the free throw line and hitting his only 3-point attempt of the night. Stevens could have gone to the rookie a little more due to his strong, physical wide-body that fights for and gets great position under the boards and paint overall.


Our team explained Tuesday night just how difficult it was to defend the duo of James Harden and Russell Westbrook without fouling. pic.twitter.com/FWtDNJS5GF
— Boston Celtics (@celtics) February 12, 2020


10. Celtics need to find a way to defend Harden and Westbrook without fouling

Houston got to the free throw line 42 times to Boston's 25, as the Rockets duo of Harden and Westbrook accounted for 27 points in made free throws. For the most part everything the Celtics tried failed in defending the two All-Star guards. They need to find a way come February 29 at the TD Garden.

Until then, the Celtics return home to host the Los Angeles Clippers Thursday before getting some much needed time off -- especially for those that will not be participating in this weekend's NBA All-Star festivities.