Romeo Langford putting in work at the right time 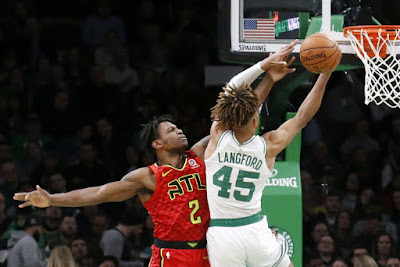 If you have been asking, "Wherefore art thou, Romeo," we got an answer Friday night in the Celtics 112-107 victory over the Atlanta Hawks.

Boston fans finally got a good look at the 14th-overall pick in last year's NBA Draft - and Langford did not disappoint.


Langford logged the most minutes (29) of any Celtics bench player - notched 16 points - grabbed five boards - snagged one steal - and blocked three shots. His contribution on both ends of the court were vital in the win.


Even his Celtics teammates know how much work Langford has put in and it is now beginning to show, especially against the Hawks.


"I know how much hard work really pays off, said Kemba Walker. "Romeo, he's been in the gym and you can see it." [MassLive]

It is apparent that during all of the time Langford has been all but invisible to fans, he has not been idle. The Celtics faithful were starting to wonder if that 14th pick was squandered on the wrong guy. Was Danny Ainge wrong to settle for Langford after Tyler Herro went off the board at No. 13? And should they have gone with Matisse Thybulle (No. 20) or Brandon Clarke (No. 21)? Friday night may have supplied an initial answer.

Anige clearly has trust in the rookie since he wasn't moved at the NBA trade deadline. Expect Brad Stevens to keep giving the Langford significant minutes to determine what they have in him. At 6-foot-6, he could be a nice addition to Boston's wing corps, and that may be helpful come playoff time.