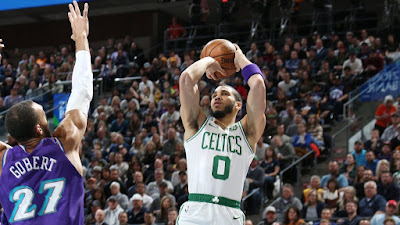 The Celtics came into Vivint Smart Home Arena winners of 10 in their last 12, before beating the Jazz 114-103 Wednesday night to wrap up a four-game west road trip on a high note.

Jayson Tatum continued his impressive month of February with a 33-point, 11-rebound performance, while shooting 13-of-20 from the field, as he battled with Jazz guard Donovan Mitchell.

Both All-Stars combined for 38 points during the second quarter, when the two third-year players went shot for shot to end the first half.


"It was fun to watch," said Marcus Smart, who scored 19 points and handed out 9 assists. "It was fun to be a part of. It's always good when you have guys going as hard as those guys were going tonight." [Celtics.com]

It was Tatum's third consecutive game with at least 30 points and shooting 60-percent or better, making him the first Celtics player to accomplish that feat since Kevin McHale in March of 1987.


"This was big for our team," Tatum said. "This is a tough place to play. It's a great way to end a road trip. We could have made excuses on a back-to-back, but we didn't." [Celtics.com]

The Celtics finished their road swing 3-1 and are now 4-4 this season when it comes to second nights of a back-to-back.

All five of Boston's starters scored in double-figures including Jaylen Brown with 20 points, 6 rebounds, while Daniel Theis chipped in 16 points and 7 rebounds.

Other than Mitchell and his game-high 37 points, Mike Conley added 15 points and Royce O'Neale scored 14 for the Jazz, who have loss four straight and are now 36-22 on the season.

Both teams came out flat in the first quarter, as the Celtics shot 36 percent and Utah went 3-of-17 for 27 percent shooting within the first 10 minutes to open the game. Mitchell sparked a 17-3 run and the Jazz took a 43-39 lead before Tatum scored 18 points on seven made baskets that gave Boston a 53-51 advantage at halftime.

The Celtics created some separation in the final frame after a back-and-forth third quarter and grabbed a 100-87 lead -- the largest of the second half, with 7:22 left and never looked back the rest of the way.


"Those two guys are really good, aren't they?" said Boston coach Brad Stevens. "Sometimes, I think we over-scrutinize the better players in this league. When you watch them do what those two were doing, not many people can do that." [Celtics.com]

Kemba Walker (left knee soreness) did not play for the fourth straight game, as the Celtics continue to hold on to the third best record in the Eastern Conference at 41-17.

Boston will conclude the month on Saturday when they head back to the TD Garden and host the Houston Rockets on national TV.