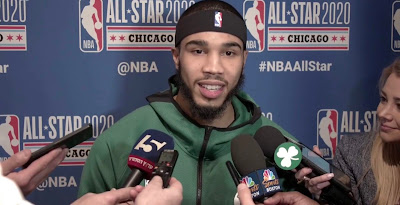 Jayson Tatum was unsuccessful on defending his Skills Challenge title during NBA All-Star Saturday night at the United Center in Chicago.

The Celtics forward and reigning Eastern Conference Player of the Week, fell short when Tatum lost in the first round of the competition to fellow All-Star and Indiana Pacers' big man Domantas Sabonis.


"That was quick," said Tatum following the end of the tournament

The challenge, which features two players going head-to-head through an obstacle course that tests each players' dribbling, passing and shooting skills, ends with one of the players making a 3-pointer. Tatum and Sabonis reached the 3-point line for their attempts at the exact same time, but Sabonis made his 3 first.

After Sabonis missed his first attempt, Tatum waited for him to do the same. Tatum's first 3-points attempt missed short off the front of the rim, and Sabonis followed up with his second attempt that fell through the net for the win.

Tatum said afterward that his loss came down to two things: how he handled his 3-point shooting, and how he didn't prepare for the event, following his finals win last season in Charlotte.


"I should have shot the second 3 quicker," he said. "I thought he was gonna miss, but he made it."

He also added about his lack of practice time: "I didn't get no practice in before. I should have practiced," he said. "They let you practice like 30 minutes before they open the doors or something. I got busy taking pictures and other stuff." [Celtics.com]

Tatum, who is a first time All-Star this year, concluded the unofficial first half of the Celtics and NBA season with a huge double-overtime win over the Clippers Thursday night on national TV.

Despite the loss in the Skills Challenge, which was won by Miami Heat's Bam Adebayo, Tatum was all smiles afterwards. Tatum said he was surprised by all of the big men in the event making their first pass attempt into the small circular net that is in the middle of the obstacle course.


"All the bigs made it on the first try," Tatum said. "I ain't get that … They had to practice that. I think they practiced." [Celtics.com]

Sabonis ended up advancing to the championship round of the bracket before he lost to Adebayo.

Tatum believes that this may be the final time he participate in the Skills Challenge, saying, "I'm gonna take some years off from the Skills Competition," after three straight years competing and a win.

He did comment on another competition he would like to try at some point: the 3-point shootout.


"I wanna do that one day," Tatum said quickly after being asked of his interest in the event.

As for the dunk contest? He shot that one down immediately.


"I ain't got no special dunks," he joked. "I just do regular dunks in the game… sometimes I dunk on people."

He's got a shot to do so on Sunday when he'll be playing in the weekend's main event, which has been a dream come true for Tatum. A year ago, the Celtics forward left town after winning the Skills Challenge, this time around, he gets to play in the All-Star game and soak it all in, for what should be the first of many.