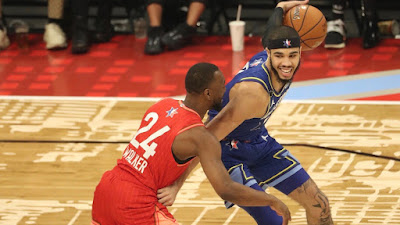 Kemba Walker and Jayson Tatum got to show off their skills and represent the Celtics during the 2020 NBA All-Star Game on Sunday night. Despite Walker and Team LeBron losing 157-155 to Tatum and Team Giannis in Chicago, the game went down to the wire in a thriller down the stretch in a new format.

While the weekend honored the late legend Kobe Bryant, his daughter Gianna and seven others lives lost a few weeks ago, Sunday's All-Star Game featured a change where each team had to win the first three individual quarters and the fourth and final period was untimed and the first to reach a target score (based off the total of each team's cumulative scores through the first three quarters) would win the game.

Team LeBron, who won the game on an Anthony Davis free throw, all wore No. 2 in memory of Gianna Bryant, while Team Giannis wore No. 24 in memory of Kobe Bryant.

Walker scored seven of his 23 points in the final frame and shot 9-of-18 overall, including 5-of-11 from behind the arc to go along with 3 rebounds, 3 assists and a steal in 29 minutes of action for Team Giannis. Tatum chipped in 6 points on 3-of-8 shooting, 3 assists and 3 steals in 14 minutes off the bench for Team LeBron.


Walker showed off his efficient shooting from 3-point range and fancy passing, despite the loss.


Tatum had a few trick passes up his sleeve and a few dunks in his first official All-Star Game under his belt before the age of 22, which he'll be turning in less than three weeks.

After celebrating a great weekend together, Tatum was asked about his relationship on and off the court with his new teammate Kemba Walker so far.


"Kemba, that's my guy," Tatum said. "Our relationship and friendship has grown a lot over this season so far, from USA basketball to playing on the Celtics to experiencing All-Star together. So it's been a good ride. We're enjoying it." [NBC Sports Boston]

Walker, who just played in his fourth consecutive NBA All-Star Game, was happy to be apart of Tatum's first midseason classic experience, but is also proud to help his teammate grow as a player too and not have to worry about the impact he knows he's capable of making on a nightly basis.


"I'm good. I know who I am and what I can do in this league," Walker said. "Jayson's really good and part of my job here, is to let him know how great he is and do whatever I can to help him be great all the time.

"Like I've been saying all year, he's a special talent. He deserves to be here. I'm happy I'm able to share this one with him; especially his first one. This is the one he's never going to forget, ever. I'm happy to be a part of it." [NBC Sports Boston]

Both Walker and Tatum will get a chance to rest for a few days before joining the Celtics on a four-game west coast swing beginning in Minnesota against the Timberwolves on Friday night. They'll then head to Los Angeles to face the Lakers, Portland to take on the Trail Blazers and close out the trip with a visit to Utah to play the Jazz next Wednesday, before returning home.