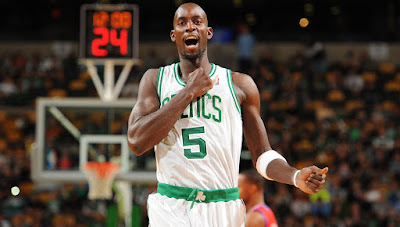 Less than 24-hours after the Celtics announced they would be retiring No. 5 into the TD Garden rafters, Kevin Garnett is now one step away from officially being inducted into the Naismith Memorial Basketball Hall-of-Fame.

Garnett, along with Tim Duncan and the late Kobe Bryant are among the finalists that were presented in Chicago on Friday afternoon.


"It's earned, you know? Whenever you get your jersey retired, that's earned,” Garnett said on his way out of the United Center. "So I'm just very appreciative of the Boston ownership and their recognizing that." [MassLive]

“This is one of the more overwhelming situations I’ve ever been in. Thank You.”


The announcement of who'll be officially inducted will come during next month's NCAA Men's Final Four and the Hall-of-Fame ceremony will take place in Springfield, MA come late August.

According to Garnett, who told the Celtics that he wanted to keep his jersey retirement moment simple, has felt overwhelmed by being a finalist and being asked to have his number retired all in a span of one day.


"I told them I don't need the Paul Pierce ceremony," he said. "I want to keep it real simple. But I am very appreciative of them asking." [MassLive]

Earlier in the day, Garnett joined Showtime's All-The-Smoke Podcast with former NBA stars Matt Barnes and Stephen Jackson, as he spoke about how he landed in Boston versus heading to the Phoenix Suns, Golden State Warriors or even the Los Angeles Lakers.

Garnett says he knew that the Suns and Warriors weren't a good fit for him, but that the Lakers were his first choice.


“I wanted to link with (Kobe Bryant)," but Garnett says Bryant didn’t answer his call.

"I shouted at Kobe he didn't pick the line up," Garnett recalled. "T-Lue (Tyronn Lue) and Kobe were close and he said 'shoot at him again and see what he on.' So I shouted again and he didn’t get back, so I had to make a decision."

While Garnett was still figuring out what would be his next move, Danny Ainge and the Celtics made their big pitch to "The Big Ticket" as soon as they saw an opportunity.


"Danny Ainge flew in. He just got right to it, showed the vision," Garnett said. "And the vision he was saying -- you ever have somebody talking to you, and as they're talking to you, you can see what they're saying so much that you’re not even looking at him no more? Painting a picture, and that's how he was painting it. This is Danny Ainge's greatness, him being able to lure you in with his charming ass. Next thing you know he was finessing me."

After seeing clips of Rajon Rondo, Garnett insisted they keep the up and coming point guard, who was originally part of the trade package for the former 2004 NBA MVP.

Ultimately, Garnett changed the culture in Boston from the moment he stepped onto the Garden parquet in the 2007-08 home season opener, that eventually led to a championship in his first season. Three trips to the Eastern Conference Finals, two Finals appearances and one ring later, Garnett's No. 5 will hang in echelons of Celtics history, right next to one of his great friends Paul Pierce.

While this is something Garnett never planned on happening, he is still trying to understand all of what has come with playing nearly two decades in the NBA.


"I never really put that on the goals. I never put that on the paper. It was all about busting these guys ass right here, crossing their names out" said Garnett. "It was about being the best in this right here and putting your name at the top. That was it."