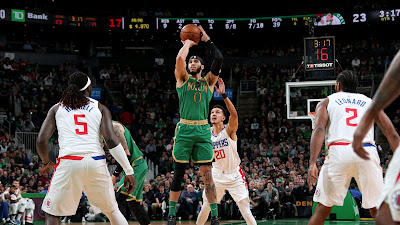 All-Star Jayson Tatum made a statement against the Los Angeles Clippers on Thursday night, as the Celtics won 141-133 in double overtime at TD Garden.

In a bounce back win following a tough loss in Houston earlier this week, Tatum finished with a game high 39 points on 14-of-23 shooting and 5-of-10 from 3, to go along with 9 rebounds.


"I did get a little excited," said Tatum, who's preparing to participate in his first All-Star game this weekend. "I try to be as calm as I can and try to keep a poker face and move on to the next play. But basketball is a game of emotions and the crowd was into it."

Marcus Smart started for the injured Jaylen Brown (calf contusion), scoring 31 points, while Gordon Hayward notched a double-double of 21 points and 13 rebounds. Kemba Walker had 19 points and 9 rebounds for the Celtics, who have won seven straight at home (eight of their last nine) and are 38-16 on the season.

The Clippers, who were coming off a loss to the 76ers on Tuesday, were without Paul George for most of the night following a hamstring strain in the second quarter. Lou Williams led with 35 points off the bench, while Kawhi Leonard recorded a double-double of his own with 28 points and 11 rebounds. Montrezl Harrell added 24 points and 13 rebounds for Los Angeles and are 37-18 on the year.

Boston took a 134-130 lead in the second overtime after a layup by Smart and another by Tatum, as both combined for 16 of the team's 27 points in the extra periods.

With the Celtics ahead 137-132, Hayward blocked a runner by Williams off his body that forced another turnover with 55 seconds left to play. Hayward would hit his next four free throws to ice the win the rest of the way and avenge their only other overtime loss to the Clippers from back in November.

Despite the Clippers' bench outscoring the Celtics second unit 65-19, all five of Boston's starting five scored in double-digits to pull of a much needed win and head into the break on a high note.

The Celtics will head out west on a four-game road trip following All-Star Weekend, beginning next Friday against the Timberwolves in Minnesota.