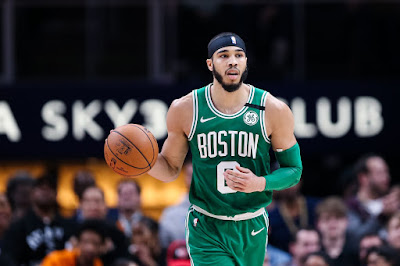 It only took seven days for the NBA to name another Celtics player for Eastern Conference Player of the Week honors. Jayson Tatum has won the award for the first time in his career, as he get's ready to participate in the first of many All-Star Games coming up on Sunday night.


Tatum joins Jaylen Brown as being honored as Eastern Conference Player of the Week for the Celtics this season. Brown has won twice, including last week. https://t.co/kUiYvwtQ4j
— Keith Smith (@KeithSmithNBA) February 10, 2020


Tatum never scored less than 25 points -- plus back-to-back 30 point performances for the first time against the Orlando Magic and Atlanta Hawks. While the Celtics have won seven in a row, Tatum has scored 20 or more points in his last nine consecutive games.

The 21-year old is also shooting 53.8 percent from 3-point land during the four-game stretch, Tatum hit a career-high seven 3's against the Hawks Friday night -- passing Kyrie Irving for 12th place on the Celtics' all-time 3-pointers made list.

It's the second time a Celtics player has been named player of the week, following Jaylen Brown, who has won it twice already, including last week's.