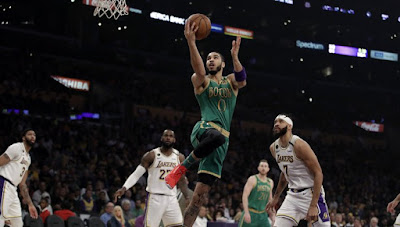 In a national televised showdown between two of the biggest rivals in sports, the Celtics took the Lakers down to the wire at the Staples Center before coming up short in a 114-112 loss on Sunday afternoon.

With under 40 seconds left to play, Boston had a 110-108 lead when Jaylen Brown committed a foul on LeBron James. After the Lakers forward sunk his first attempt, he missed the second and the rebound bounced off the fingertips of both Brown and Anthony Davis that went out of bounds.

While the replay appeared to show that Davis touched the ball last, it was ruled Lakers ball and James would hit a 15-foot jumper to give Los Angeles a one-point lead with 30 seconds remaining.

On a Brown pass to Jayson Tatum just past halfcourt, Tatum collided with Kentavious Caldwell-Pope trying to gain possession and the ball went out of bounds. Tatum and Brad Stevens disputed the lack of a possible foul call on Caldwell-Pope, before Stevens got hit with a technical foul -- which Davis would miss the technical free throw.

However, Davis got fouled on the Lakers inbound pass and hit two free throws to put Los Angeles up 113-110 with 12.3 seconds left.

The rookie Grant Williams hit two free throws, after being fouled intentionally to get the Celtics within one.

Davis was fouled again, but only hit 1-of-2 from the charity stripe, which gave Boston a chance to tie or win on one last possession. Tatum was whistled for an offensive foul just before getting off a potential game-winning 3, giving the Lakers the win and avenging last month's 32-point loss to the Celtics.


"That's a great atmosphere," said Jaylen Brown, who finished with 20 points and 6 rebounds. "It don't get too much better than that. To be honest, I had a great time. Even though we lost, it was fun being out there competing at the highest level, and it makes you thirsty for the postseason."

It was Tatum that picked up the slack for his Celtics teammate Kemba Walker, who sat out for a second straight game with knee soreness, as the All-Star forward scored 41 points on 12-of-20 shooting (4-of-7 from behind the arc) to tie his career-high.

Daniel Theis added 16 points, 9 rebounds, while Marcus Smart chipped in 14 points and 7 rebounds for Boston, as they're now 39-17 on the season.

Kyle Kuzma scored 16 points and Dwight Howard netted 10 points off the bench for Los Angeles, to help split the season series with the Celtics 1-1.

Though Tatum shot 60 percent from the field, it was the Lakers defense that held the Celtics forward to just six points in the final 18 minutes of the game.


"It was a step in the right direction," Tatum said of his performance against James and Davis. "I definitely looked up to those guys and know how great they are individually, so just trying to earn the respect of the guys I look up to."

Next up for the Celtics is a back-to-back against the Portland Trail Blazers on Tuesday, then the Utah Jazz the following night.

Tatum at the age of 21, became the first Celtic to score 40 against the Lakers since Paul Pierce back in 2001.