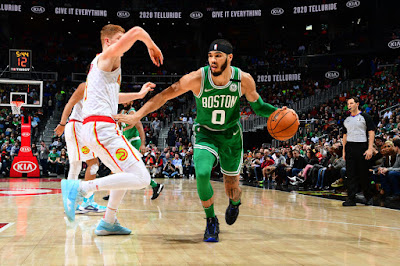 When Trae Young's 23 first-half points propelled the Hawks to take a 62-60 lead into halftime against the Celtics, it forced Brad Stevens to get creative with his defense.

Without Kemba Walker and Marcus Smart at his disposal, he inserted Javonte Green into his starting lineup and welcomed back Enes Kanter off the bench but that didn't prevent Young from scoring 17 in the first quarter -- which made it clear that Stevens needed help defending Atlanta's backcourt.

He turned to Brad Wanamaker, who played close to 30 minutes Monday night, Tremont Waters, who entered Atlanta with a whole 57 minutes of NBA experience and Carsen Edwards, who's shown flashes of a potential solid on-ball defender at the pro level despite his undersized frame.

Wanamaker came up big. He dished out five assists and scored a pair of 3-pointers on one end and grabbed four steals on the other. Kanter, who's missed the Celtics' previous five games due to a bad right hip, scored eight points, pulled down five rebounds and did it all under four minutes. He was off to a quick start.

Still, the Celtics' defense sorely missed Smart and playing against one of the best scorers and newest All-Stars in Young called for someone from the Celtics to step up.

Young's running mate, Jeff Teague (18 points on 7-of-14), caught fire while Kevin Huerter drained five 3-pointers on his way to 23 points on 9-of-21 attempts and John Collins (22 points, 11 rebounds) added a double-double.

However, the Celtics looked like a different team after halftime. They ran their offense fluidly and created opportunities for Jayson Tatum to shine and take matters into his own hands, and that's exactly what he did and it ultimately led to a 123-115 Celtics win.

He finished with a team-high 28 points, including five treys of his own to go with his seven rebounds. But it took the Hawks a while to lay down for the night, their runs came in bunches whether it was a 3-pointer from Huerter or an easy backdoor layup for Young or Teague.

It missteps drove Stevens into 'Mad Brad' on several occasions but it was Tatum's big second half finish that ultimately closed the door on the Hawks once and for all. He poured in 20 of his 28 points in the latter halves at a 50 percent clip (10-of-20) while Gordon Hayward (24 points, 7 rebounds, 6 assists) and Jaylen Brown (21 points on 9-of-17) all finished with 20-plus points and shot above 50 percent.