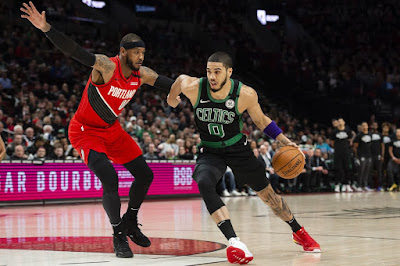 As Jayson Tatum continues to transcend towards NBA stardom he's emerged as one of the league's most talented scorers while stunning his childhood idols in the process.

It's been quite the month for the third-year forward. Averaging 30.3 points, 7.2 rebounds while shooting at a 50 percent clip, Tatum is playing at a level we've never seen before and after playing in his first All-Star game, he added another pair of impressive performances in the midst of the Celtics' four-game road trip.

Tatum followed up his career-high 41-point performance against LeBron James and the Lakers by reaching another career milestone Tuesday night in Portland -- where he netted a career-best eight 3-pointers on his way to 36 points on 14-of-22 attempts from the floor. He was magnificent while propelling the Celtics to a 118-106 win over the Trail Blazers.

CJ McCollum led Portland with 28 points, 10 assists and Hassan Whiteside notched a double-double (18 points, 19 rebounds) of his own.

However, Tuesday night marked the third time Tatum has scored at least 30 points in his last four outings and you can add Carmelo Anthony to the list of players the Celtics' first-year All-Star looked up to as a kid but was also on the receiving end of one of Tatum's sensational performances.


"Man, besides Kobe, Melo was one of my top three favorite players," Tatum said after Tuesday's win. "I studied him so much growing up. One of his biggest fans... I really looked up to him growing up." [MassLive]

The two swapped jerseys after the final buzzer. It was a gesture initiated by Tatum, who shared a few words with Anthony as the veteran forward congratulated the 21-year-old phenom.


"I love him," Anthony said. "He's a guy that is establishing himself as we're all witnessing, we're all watching. I love his game, I love watching him play. I was able to have some 1-on-1 time with him, get a chance to know him better as a person first, but his game speaks for itself, and he continues to blossom." [MassLive]

Lakers forward LeBron James, whose encouraging words for Tatum was posted on his Instagram hours removed from his 114-112 win over the Celtics, felt compelled to give props to one of the league's newest superstars.


Meanwhile, the Celtics, winners of 10 of their last 12 games, steadily hold the third-best record in the Eastern Conference with a four-game lead over the Heat. They earned their 40th win of the season, the Celtics are only the fifth team to do so thus far and while Tatum continues to dominate on a nightly basis in February, it's seemingly infectious among one of his teammates.

Jaylen Brown, who's also having one of his better months of the regular season, finished with 24 points and seven rebounds against the Trail Blazers. It was his fourth consecutive 19-plus point game, 11th of his last 14.

However, Brad Stevens reminded everyone of how important it is for the Celtics to not only rally around guys like Tatum and Brown but to also take their game to new heights.

The Celtics will close out their four-game road trip Wednesday night in Utah when they take on the Jazz.