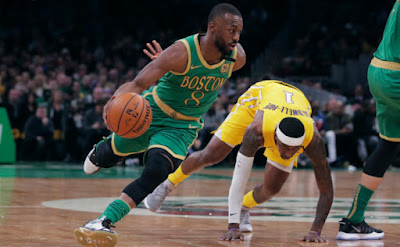 Kemba Walker will have to wait a little longer before he can contribute to the Celtics post All-Star break.

Walker's sore left knee will keep him out on Sunday when Boston visits the Lakers for an a nationally televised afternoon showcase at the Staples Center. The Celtics point guard also missed Friday night's win over the Timberwolves, as he continues to deal with soreness following his knee being drained and receiving an injection to relive some swelling.


#NEBHInjuryReport for tomorrow vs. LA Lakers:


Despite Walker already missing nine games this season, soon to be 10, Celtics coach Brad Stevens doesn't believe that this will be a long-term issue, especially after Walker played around 30 minutes in a somewhat intense All-Star Game that picked up in the fourth quarter.

Walker has been one of the more durable players in the league in recent years, missing only six games over his final four seasons in Charlotte. According to Adam Himmelsbach of the Boston Globe, Walker really wanted play against the Lakers.


I know Kemba really, really wanted to play tomorrow, but would’ve been borderline irresponsible of the Cs given how the past few weeks have gone for him.
— Adam Himmelsbach (@AdamHimmelsbach) February 23, 2020


In his first season with the Celtics, Walker is averaging 21.8 points, 5.0 assists and 4.1 rebounds in 46 games played so far.

There is no timetable on Walker's return, as the Celtics will head to Portland on Tuesday, then Utah on a second night of a back-to-back before returning home to host the Rockets at TD Garden on Saturday night.