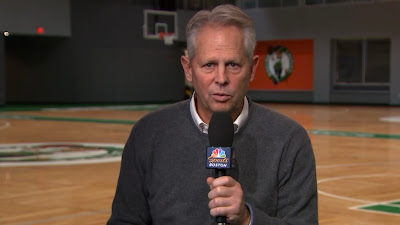 The NBA trade deadline came and went, while Danny Ainge stood pat without making any moves and apparently is happy with the Celtics current roster going forward.

Ainge was reportedly active on the trade market, but ultimately didn't pull the trigger with many teams asking for too much in return.

Celtics president of basketball operations spoke on NBC Sports Boston Thursday night about why he felt like there was no right move to make except standing pat and how legend Red Auerbach helped him come to that conclusion as 3 pm rolled around.


"You've got to find good deals. It's not about making deals, it's about making good deals. And I remember Red Auerbach told me one time on my first year on the job, 'Some of the best trades that I've made are the ones that I didn't make'.  And that actually has stuck with me. This year I think everybody feels good that we didn't make any moves with what the market prices were."

This week prior to the deadline, the Celtics were rumored to be interested in several players including Clint Capela, Andre Drummond, and Davis Bertans. Capela and Drummond were traded to the Atlanta Hawks and Cleveland Cavaliers respectively, while Bertans is still with the Washington Wizards despite Ainge reportedly making "several strong offers" for the 27-year-old sharpshooter.


Boston made several strong offers to Washington for Davis Bertans, but the Wizards wouldn’t budge. Washington remains committed to re-signing Bertans this summer as a stretch-four opposite John Wall and Bradley Beal.
— Chris Mannix (@SIChrisMannix) February 6, 2020


Ainge did mention health as the team's main concern, considering all the bad luck the roster has seen with injuries all around. So he had to take that into account when making a decision to either make a move or not.


"I think our No. 1 need is health," Ainge said Monday. "I think we're going to look to see if there's ways to strengthen the end of our bench. We like all of our guys. We do have probably too many really young guys."

Obviously, Ainge will explore the buyout market, as veterans like Tristan Thompson, Evan Turner, and Isaiah Thomas become available in the upcoming days and can be helpful to any playoff team, especially one contending for a championship.

While Boston at 35-15 are currently a game and a half behind the Toronto Raptors (37-14) as the third seed and the Miami Heat (34-16) are a game behind with the fourth best record in the East after pulling off a trade for Andre Iguodala, Jae Crowder and Solomon Hill on Thursday, the race for the second seed will be a tight one down the stretch.

With 32 games remaining and Boston's health still in question, maybe adding a veteran presence via a buyout may be even more necessary than trading for that one more piece so many believed the Celtics needed.


"I hear people talking about why we didn't do a deal. A lot of times people want us to get the first- or second-best player on another team," said Ainge. "Those players are expensive and, if we brought them here, they would be the seventh-, eighth-, or ninth-best player on our team."