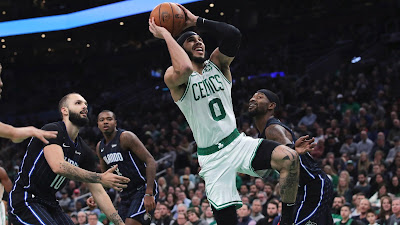 The hospital Celtics needed a boost one more time against the Orlando Magic and Jayson Tatum stepped up to the plate to knock it out the park on Wednesday night.

Tatum scored 16 of his 33 points (11-of-24 shooting) in the second half, to go along with 8 rebounds and 5 assists to hold off the Magic's late rally in the fourth quarter and beat Orlando 116-100 at TD Garden.

It's the sixth time this season that Tatum has hit the 30-point mark, as the Celtics have won their fifth straight and eight of their last nine games.

Tatum, who was named an NBA All-Star reserve last week, has averaged 26.5 points on 45.6 percent shooting, 6 rebounds and 3.5 assists in his last four outings following a return to the lineup from a groin injury.

Brad Stevens was without Kemba Walker (knee), Marcus Smart (hip) and Daniel Theis (ankle), as the Magic took full advantage of Boston being shorthanded when they took an early 12-5 lead in the first quarter. The Celtics used a 27-12 run to end the period, but only led 57-56 by halftime.

Orlando held Tatum to only three points in third quarter before he scored 10 straight points in the final frame to give the Celtics a 99-91 lead with 6:52 left to play.


"He's an All-Star for a reason," said Gordon Hayward, who finished 23 points, 7 rebounds and 7 assists, about Tatum. "Kemba was out, he stepped up."

Celtics rookies Romeo Langford (6 points on 3-4 shooting) made his first career start for Walker and Grant Williams continued his strong play, scoring 13 points (3-of-4 from 3) and grabbing 6 rebounds in 22 minutes off the bench, were both key contributors for coach Stevens.


"We battled," Hayward said. "Some of it is just being able to experience playing with each other more and more. We've had guys in and out of the lineup all year, so we kind of get used to that."

Evan Fourier led the Magic with 26 points, while Aaron Gordon notched a double-double with 23 points and 10 rebounds. Terrance Ross added 18 points and Michael Carter-Williams chipped in 12 points and 6 assists.

With less than three minutes remaining, Orlando got within 105-98 after a Nikola Vucevic's made basket, to record a double-double of his own -- 12 points, 10 rebounds. Hayward and Tatum responded by hitting back-to-back 3's each to push the Celtics lead 111-98 with 1:46 left and the Magic would only score two points the rest of the way to drop their sixth of the last seven games.

Jaylen Brown scored 18 points and grabbed 5 rebounds before limping to the locker room moments before the final buzzer, following what appeared to be a right ankle roll. Stevens didn't seemed too concerned when asked about an update on Brown's injury.


"It didn't look bad," Stevens said. "It just looked like he stepped wrong, and just tweaked it. So, (it) didn't look like (Daniel) Theis' the other day or anything like that. (He'll) put (it in) a bucket of ice, like most of those guys do after every game anyways, so hopefully we get him back sooner rather than later," Stevens said. "I don’t know … what it's going to be."

Boston shot 53.5 percent from the field, while holding the Magic to 42.7 percent shooting. The Celtics outscored Orlando in the paint 50-34 and finished with 23 assists on 46 made baskets.