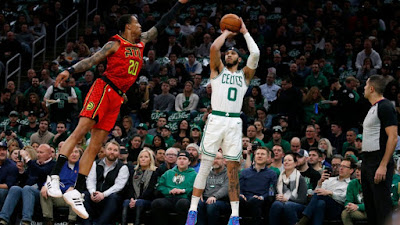 Jayson Tatum had another career-night as the Celtics beat the Atlanta Hawks 112-107 at TD Garden on Friday night.

The first year NBA All-Star finished with 32 points on 10-of-19 shooting, including a career-high seven made 3-pointers (7-12) to go along with 6 assists. Tatum hit the 30 point mark in back-to-back games for the first time and passed Kyrie Irving for 12th place on the Celtics all-time 3-point scoring list.

Boston was playing without Jaylen Brown (ankle), Gordon Hayward (knee) and Daniel Theis (ankle), while Kemba Walker (15 points, 6 rebounds, 6 assists), who missed three straight games with knee soreness and Marcus Smart, who missed the last two with a hip injury -- both made their way back into the lineup.

Enes Kanter started in Theis' place, notched a double-double of 16 points and 15 rebounds, while rookie Romeo Langford, who was a game removed from making his first start -- scored a career-best 16 points, grabbed 5 rebounds and blocked 3 shots in 29 minutes off the bench.


"I was a lot more comfortable," said Langford, who at times found himself guarding Vince Carter. "It took me a little bit to get the rhythm of the game, but once I got running up and down the court a little bit, I felt like I belonged out there."

For the Hawks, they were without their All-Star guard Trae Young and none of their new trade additions of Clint Capela or Dewayne Dedmon, but keep the game close nearly the entire night. John Collins led them with 30 points and 10 rebounds, while Kevin Huerter added 25 points and 6 assists. Brandon Goodwin chipped in 21 points off the bench, as Atlanta is now 14-39 on the season.

It looked like it was going to be a long night for the Hawks when the Celtics jumped out to a 21-7 lead to open up the game, before Atlanta went on 21-7 run to get within two to start the second quarter.

With two chances to tie it and 18.3 seconds remaining, Huerter and Goodwin both missed 3-pointers for the Hawks before Langford grabbed the rebound and made both free throws to ice the win after getting fouled.

It wasn't a pretty win for the Celtics (36-15), who will now head out on the road to face the Oklahoma City Thunder Sunday and the Houston Rockets Tuesday, two teams that they can't afford to cough up a double-digit lead.


"That's something as a team we're still learning and we're still getting better at,"said  Smart, who finished with 9 points, 6 assists and 5 rebounds as a starter in Brown's place. "We've got to play to the final buzzer. That's what's gonna make us a great team. We still have a lot to learn. But I like they way we did tonight."

Boston has now won sixth in a row and nine of their last ten and will wrap up the unofficial first half of the regular season next Thursday when they return home to host the Los Angeles Clippers before the All-Star break.

Vince Carter, who is playing in his 22nd and final season in the NBA, finished with 10 points, 9 rebounds and 4 assists in his last game against the Celtics. Danny Ainge presented the Hawks veteran and the league's oldest player (42 years-old) with a plaque and picture of his first points scored as a rookie, against none other than Paul Pierce and it also included a piece from the original parquet of the Garden.