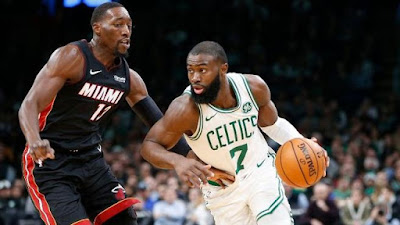 Jaylen Brown has been named Eastern Conference Player of the Week, as the NBA announced Monday afternoon.

Brown averaged 25 points on 55.8 percent shooting and 6.3 rebounds for the Celtics, who went 3-0 for the week of January 27th - February 2nd, which included a win over the Miami Heat on the road, plus victories over Golden State Warriors and the Philadelphia 76ers at TD Garden.

Despite the Celtics guard not getting voted as an All-Star reserve, Brown is averaging career-highs all across the board this season in points (20.4), rebounds (6.6) and assists (2.4), while shooting 49.7 percent from the field, 37.9 percent from behind the 3-point arc and 75.3 percent from the free throw line.

This is the second time that Brown has grabbed Player of the Week honors, the first time for a Celtics player since Isaiah Thomas won the award twice during the 2016-17 campaign.

Brown, who is coming off a 32-point (13-of-23 shooting), 9 rebound performance against the Sixers, was named Player of the Week last month during the week of December 30th through January 5th.