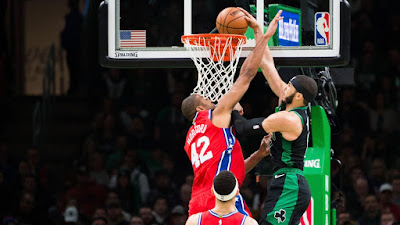 Saturday night's Celtics 116-95 drubbing of the Philadelphia 76ers revealed a lot about both teams. Here are some takeaways from the game, with views from both sides of the fence.

Where would would the Celtics be with Theis? With the aftereffects of his meniscus injury behind him, he has become a defensive presence and rim protector for Boston. His defensive work on Joel Embiid was masterful, as the Sixers' bih man managed a mere 11 points for the game on 1-of-11 from the field and 0-of-4 from beyond the arc, finishing with a team-low plus/minus of -25. The rap against Embiid has been that he doesn't play hard enough, and it showed. He was manhandled by the undersized duo of Theis and Grant Williams.

Even the Philadelphia media had thoughts on the Embiid-Theis duel, here's what Philadelphia Inquirer's David Murphy had to say.

"Give Boston big man Daniel Theis some credit. He played a heck of a defensive game, giving the Celtics a presence that they did not have the last time they faced the Sixers, a game in which Embiid scored 38 points on 12-of-21 shooting. For the most part, though, this one was on Embiid, who never looked like he knew exactly what he should be doing on the court. After that opening bucket against Theis, he was almost non-existent in the post. That's going to be a tough way for the Sixers to win, especially on a night where their outside shots weren't falling."

The Jay Team is making it look easy


Jaylen Brown and Jayson Tatum combined for 57 points, 12 boards, five assists and three steals. In two separate sequences, Jaylen Brown took the Sixers' Ben Simmons and Matisse Thybulle to school 1-on-1 with some dazzling moves that we never saw the past few seasons. Plus, who can forget Tatum's ferocious dunk on old friend and former Celtics teammate Al Horford? This pair seems destined for greatness.


Gordon Hayward had a bad shooting night - which means absolutely nothing


Prior to Saturday, Hayward put in fine performances in the previous four games of 20 points or more. He was due for one like this, as the Celtics forward put up only four points on 1-of-11 from the field. The shot attempts were generally good ones that simply didn't connect. Every NBA player has these duds. It means nothing.

The Williams/Ojeleye/Wanamaker bench came through


The bench trio of Semi Ojeleye, Grant Williams and Brad Wanamaker accounted for 31 points and nine rebounds, shooting a combined 9-of-20 from the field, 3-of-8 on treys and 10-of-12 from the free throw line

"Give the (Celtics) bench a lot of credit. They only rotated eight guys. Grant Williams, Ojeleye and Wanamaker came in and gave them 18 quick points," said Hubie Brown during the ABC national broadcast.

The 76ers sorely need outside shooting


The Sixers shot a horrible 36.9 percent from the field and 21.2 percent from 3-point land in Saturday's blowout. Their need for at least one addition to the team that can hit from outside has been discussed at length, according to David Murphy of the Philadelphia Inquirer.

"This was as strong an argument as the Sixers could have made that what they need more than anything at the trade deadline is a three-and-D wing.

"With nine minutes left, the Sixers were somehow within 13 points of a game in which they were shooting 5-for-26 from three-point range and everybody not named Ben Simmons was shooting 18-of-58 from the floor overall. Shake Milton was 1-for-4 from deep and had missed a couple of open looks. Matisse Thybulle was 1-for-3. Mike Scott, Raul Neto and Furkan Korkmaz were a combined 1-for-9. Meanwhile, Jayson Tatum and Jaylen Brown had combined for 46 points.

"After Tatum scored 11 points in the first quarter, the Sixers did a decent job of keeping him under wraps. But there were a number of occasions when you could picture an upgrade on the wing paying significant dividends."

While the 76ers are graced with loads of talent, but the construction of the team seems flawed. It starts with their lack of outside shooting and Embiid's occasional disappearing act. If Boston has a weakness it would be their lack of size - but it often doesn't seem to matter. Theis, Williams and Ojeleye are all undersized for what they do, but they get the job done. Ojeleye continues to progress into a solid backup this season, especially when there are injuries.