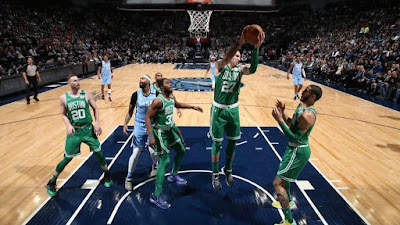 The Celtics picked-up from where they left off prior to the All-Star break, with a 127-117 win over the Timberwolves on Friday night at the Target Center.

Despite Boston's defense not being on par for much of the evening, it was their offense that held on for the first victory of a four-game west coast road swing.

With no Kemba Walker in the lineup after a sore left knee that reportedly needed to be drained, following last Sunday's NBA All-Star Game, it was Gordon Hayward that led the five Celtics starters in double-figure finishing with 29 points -- as the game's leading scorer.


"The strength of our team is just the amount of guys that can go off at any point in time, especially when you're making the right plays and getting easy looks," said Hayward, who also added 6 assists, 5 rebounds and 2 steals to his stat-line. "We're too talented. We just need to continue to do that."


"It just shows how deep and how good our team is," Theis said

Jaylen Brown added 25 points and 8 rebounds before fouling out late in the fourth quarter, as the Celtics have won nine of their last 10 and are now 39-16 on the season.

For Minnesota, who was playing without Karl Anthony Towns (wrist), had their fair share of offense. Malik Beasley scored 27 points and rookie Naz Reid added 19 points and nine rebounds, as he started for the injured Towns. Newly acquired D'Angelo Russell had 18 points and 13 assists, while Juancho Hernangomez added 17 points for the 16-28 Timberwolves.

After a 16-point second quarter for Beasley, Boston still led 61-53 at the half before they pushed their lead 68-55 to start the third. Despite Hayward's 15-point period, the Timberwolves got within two.

In the final frame Minnesota cut into a couple of double-digit deficits to be only down one, but never gained a lead the rest of the way. With 3:55 to go, Tatum hit a 3-pointer to give the Celtics a 119-111 advantage to ice the game.

Boston will head to Los Angeles to face the Lakers on Sunday afternoon. ABC will have the tip-off at 3:30 pm ET.

Marcus Smart started in place of Walker and scored 10 points while leading the team with a season-high 10 of the Celtics 21 total assists -- on 44 made baskets. Boston also out-rebounded the Timberwolves 66-51.