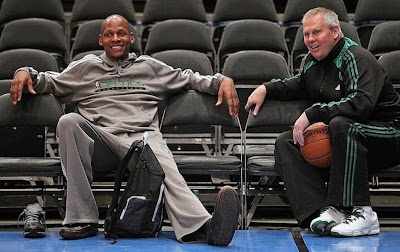 It's been an on-going debate since Ray Allen decided to take his talents to South Beach, Miami and the Heat back in the summer of 2012, if the former Celtics guard should get his number retired one day.

On the heels of the Celtics announcing that Kevin Garnett will have officially his No.5 hanging from TD Garden at some point next season, Danny Ainge weighed in on the conversation during his weekly appearance on Boston's 98.5 The Sports Hub.

When asked if Allen's No. 20 was worth honoring, Ainge said that it's not up to him and that the manner in which the all-time 3-point king (for now) left the organization "will have some impact" on the Celtics' decision whether or not to retire his number.


"These are not my decisions," Ainge said on Wednesday on the Toucher & Rich morning show. "So if someone asks my opinion on this, I'll weigh in at the appropriate time. But this is [Celtics owner Wyc Grousbeck]'s team and he gets to make those decisions."

Despite all that has happened over the last seven and a half years and Ainge not being happy that Allen choose to go to Miami and win another ring, the Celtics president of basketball operations says his relationship with Allen is still a good one.


"We get along great. I'm a big, big fan of Ray. I'll always be grateful to Ray for the championship that he gave us."

Clearly, others in the Celtics front office don't not feel the same way, but Ainge says he "no longer holds any grudge against Allen," as he also expressed "I know that's not the exact same feeling of everybody in the organization."

While like many Boston sports fans, who still haven't forgiven Allen's decision to bolt to Miami, Grousbeck -- a well known, life-long Celtics fanatic, may actually just share the same sentiment that time hasn't yet healed.

In any case, Garnett getting his number retired will complete the most recent banner of numbers that will no longer be used by any Celtics player in the future.

Though Ray Allen has not had his number retired by any of the four teams he played for (Bucks, Supersonics, Celtics or Heat) during his 18-year NBA career, Gordon Hayward currently wears No. 20 and is the first player since Allen to use it when he signed as free agent signed back in 2017.

Allen played five seasons in Boston from 2007-2012 and helped win the Celtics their 17th championship back in 2008, the franchise's first and only NBA title in the last 33 years. Allen entered free agency and rejected a reported two-year, $12 million deal from the Celtics (including a no-trade clause), opting to accept a three-year contract (worth $9 million) instead and a bench role with the rival  Heat, where he won a championship in 2013 -- while hitting one of the biggest shots in NBA Finals history.

It seems like the Allen debate will just have to continue in Boston, at least for the time being.