Robert Williams participates in full practice, says 'I'm ready to play,' as his return is near 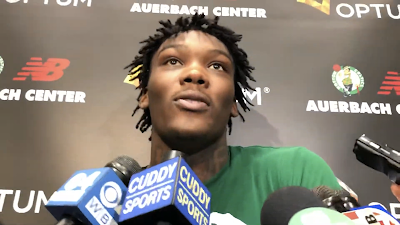 Celtics center Robert Williams has been out of action with a hip edema since December 6th, but he is scheduled to be back on the court very soon.

After missing 33 games and counting, Williams -- who says he's "getting anxious" about his return, participated in a full practice at the Auerbach Center for the first time in over two months.


"We're all waiting for my comeback," said Williams on Wednesday night. "They let me free now, there's no limitations on anything I'm doing. I want to windmill every time I dunk. I still got to play it cautious a little bit, you know what I'm saying? Just wait for the time."

According to teammate Jaylen Brown, Williams brought "a lot of high energy" and made "some ridiculous plays."


Celtics coach Brad Stevens said Williams will practice for the next week before undergoing a hip scan to see how his body responds to the increased physical activity. The team is set to head on a four-game west coast swing beginning on Friday against the Timberwolves, which Williams will make the trip, but not play.

"He'll practice and workout between the next week or so and then go through a final exam...

From that point on he'll either be cleared or he won't"


Danny Ainge pointed to a possible return of Williams being as soon as March 1 when it comes to a target date. The Celtics return from their road trip on February 29th, when they host the Houston Rockets at TD Garden.

Williams' performance during the remainder of the regular season will have a major influence on the Celtics president of basketball operations' plans for his team come the offseason.

The question remains whether the 26 NBA general managers got the right read on Williams III when they passed him by in the 2018 Draft, or did Boston get a gift handed to them with the 27th pick. Is Williams simply a super-athletic novelty or a legitimate NBA-level rotation guy? We just don't know for sure and Williams' long layoff almost certainly has set his progression back a notch.

He certainly has shown flashes of talent when given the chance, in fact, he could be just the near-perfect center/forward for a Celtics team loaded with shooters and versatile wings. Williams can certainly fill the role of rim protector, while grabbing a decent number of rebounds, scoring on lobs and put-backs, and covering the perimeter. And his passing skills have been a pleasant surprise to many.

Ainge has to ask himself if Williams can be the Celtics primary center down the line. Or at least can he be an 18-20 minute backup at the center and power forward positions? The Celtics have questions about the five-spot this offseason. Daniel Theis has a team option hanging over his contract for next season, and Enes Kanter has a player option on his deal for the 2020-21 season. And Stevens has employed 6-foot-6 rookie Grant Williams at the center position at times with decent results.

While Williams seems eager to get back to work, the Celtics have already picked up the option on Williams' contract for the 2020-21 season at just over $2 million and they have an option for the 2021-22 campaign at $3.6 million. These figures will be bargains if Williams fulfills his promise as an NBA regular, and the low dollar-figures would be welcome on a team trying to pay its present, and future stars in the bodies of Kemba Walker, Gordon Hayward, Jaylen Brown and Jayson Tatum.

Boston's remaining 28 games should clear some of the fog hanging over Ainge's impending summer-of-decisions. A solid, consistent showing by Robert Williams should make things less cloudy for Ainge as he decides who stays - who goes - and what potential deals might present themselves this summer.