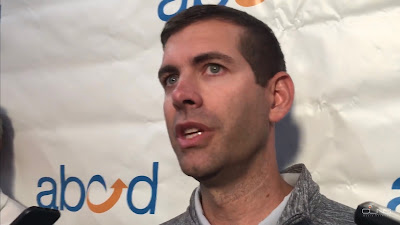 In less than three weeks the Celtics will officially open up their training camp and coach Brad Stevens is anticipating a full roster ready to go by then.

Stevens spoke to the media on Tuesday night, during the annual ABCD Hoop Dreams charity event at the TD Garden about this upcoming season and his team being healthy.

"I've been told that everybody is going to be ready to go," Stevens said. “It’ll be a great opportunity to start afresh with a brand new team, though we do have a lot of guys back, and see if we can be the best version of ourselves."

Stevens has followed Hayward's progress as the All-Star is expected to be cleared for practice soon.


"He looks good," Stevens said of Hayward. "I saw him a couple of weeks ago in San Diego. I went out there and watched him work out. He looked really good. Then, two weeks or three weeks later, seeing him again ... you can't tell anything from my untrained eyes. He looks good. He'll be cleared to go some 5-on-5 here very, very, very soon."


"Daniel was in the gym this morning, he looks great." Stevens said. "He has not been cleared for 5-on-5 play yet, but the anticipation is he will by the start of training camp on Sept. 25."

Last week, the Celtics president of basketball operations Danny Ainge told ESPN that he expects the team to be at full health by the start of training camp.

With Greg Monroe (Toronto) and Shane Larkin (Turkey) being the only role players not returning from last season's roster, the Celtics signed Jabari Bird (two-year deal) and drafted big man Robert Williams (27th overall pick this past June), as Stevens hopes his team will have better continuity than a year ago.


“I think we’ve got a really good locker room,” Stevens said. “I don’t think it’s any secret to anybody that there’s only 240 minutes in a game. If we all struggle with that, more than just the human nature if you get taken out -- that’s OK, that’s part of it -- but if we all struggle with that, then we won’t be very good. If we don’t, then we’ll have a chance to be pretty good.”

Despite debates of how the Celtics starting-five should look like, Stevens said he hasn't thought about who will start or who will come off the bench. Instead, he did remind reporters on how last season's roster was willing to accept any role in order to win.


“Your rotation can change in a heartbeat,” Stevens said. “You can work all summer on it and then you’ve got to adjust in one day. The bottom line is we have an idea of who we’ll play together and who best fits together and what lineups we think we’ll try to use, but we’ll see how it shakes itself out.”


You can watch Brad Stevens full presser below: