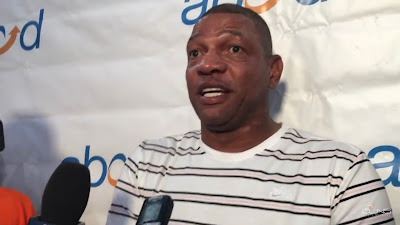 Rivers didn't mince words on Tuesday during the ABCD Hoop Dreams annual event at the TD Garden, when he spoke about wanting his former players to reconcile, in particular with Ray Allen, who prepares to be inducted into the Basketball Hall-of-Fame this Friday.

Allen's relationship with his former Celtics teammates has been complicated at best, since heading to the rival Miami Heat in the summer of 2012.


"As years have gone on, things have been fractured, and I hate it. I hate seeing it," Rivers said while in Boston for the annual fundraiser that he runs with current Celtics coach Brad Stevens. "I would love this [to be a] celebration for Ray. Not a lot to say here about it. Ray won us a title. He really did.

Allen and Paul Pierce looked to mend fences last summer at a basketball event in China, but it did little to ease any animosity with Rajon Rondo or Kevin Garnett. It also didn't help matters much when Allen did not show up to Pierce's jersey being retired, where Rondo, Garnett and Rivers were all in attendance.

Let's not forget Allen's tell-all book, where he mentions his many issues with Rondo, Garnett and even Rivers during their five years together in Boston.

Earlier this week, Allen told The Athletic that he doesn't expect any of his ex-Boston teammates to reach out and congratulate him on his induction.


"I've tried, I can tell you that," Rivers said. "It's a lot of little things. Here's the thing: You have two Hall of Fame guys as far as their competitiveness. The reason that Ray was who he is, Rondo was who he is, Kevin, Paul -- I think Paul has done the right thing as far as throwing out the olive branch. [But] it's also why we were really good is why they don't get along: very stubborn, very tough, very competitive and no one wants to give in.

"The phrase I used to use a thousand times in arguments with the team: 'It's about getting it right, not who is right.' I hope we can get that right because they are all probably right in whatever they are saying in some way or form, but they need to get it right and get together."

Rivers, now heading into his sixth season as the coach of the Los Angeles Clippers, reminded reporters why the 2008 Celtics team was on of the best in NBA history. Rivers believed it began once Pierce, Garnett and Allen all checked their egos in the summer of 2007, that's when the desire to win became that much more evident throughout the season.


"That team, the 2008 group, was as close of a group as you could ever coach," Rivers said. "Everyone bought into their roles. It wasn't a perfect group all the time. We had our arguments and our differences, and that's fine.

"On the floor, I'd take that group every night to go to war. If I had one game to win for my life, I'm taking that 2008 group and we're going to go to war, because you know they were going to show up and do it together."


You can watch Doc Rivers full presser below:

Photo used is courtesy of CLNS Media
Posted by Joel Pavón at 10:37 AM