Marcus Smart opens up about the death of his mother 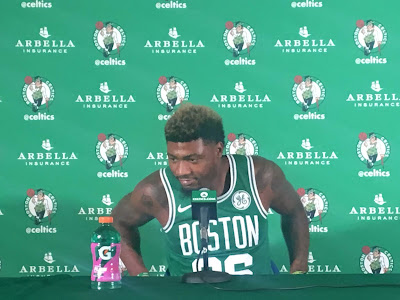 For Marcus Smart, basketball has always been his sanctuary.

It's where he finds peace, especially during life's most challenging times. Smart is currently going through one of those times.

Reeling from the death of his mother, Camilia Smart, who loss her bout with bone marrow cancer one week ago, Smart reflected on what basketball means to him during these grief stricken days and how thankful he is for the outpouring support he's received from his teammates and the Celtics organization.


"The last couple of months have been real humbling," Smart said. "It brings you back to reality. I have a great supporting cast around me and a great community in Boston and a great organization in the Celtics, friends and family. Right now it's the easiest part because I have a lot of people around me. The hardest part is going to be when everybody has to go back to reality.

"When everybody gets back to work and go back to our own life. That's when it's going to hit me the hardest. But I've seen and been a part of this before so that takes away from it and make it a bit easier. I don't think it's ever easy to lose a love one, especially your mother but, like I said, I have a great supporting cast around me."

Basketball will certainly be an escape for Smart during the darkest times that lie ahead. He knows the 2018-19 campaign will serve as a coping mechanism to get him through the turmoil and explained what the sport truly means him.


"I look at basketball like a storm but it's the eye of the storm," Marcus Smart explained. "It's a tornado or something like that. The calmest place of it is to be right in the middle, the eye of it and that's what basketball is for me, it's my eye. While everything else is going on around me -- the distraction, the destruction and things like that -- basketball keeps me calm.

"That's probably why I go out and you see me dive on the floor or take a charge or throw my body this way and give it everything I have because I know and I understand that any day can be my last day. And if it was, would I be proud of what I've accomplished in that time here? God has blessed me with an ability to go out here and play the game that I love to play and I don't want to make him regret or feel any regret about it so I go out there every day and play it like my last."

On July 19, almost three weeks after the start of free agency, Smart agreed to a four-year, $52 million extension. It was a deal Smart wasn't sure would ever materialize after the Celtics failed to reach out to him throughout the opening week of free agency.

At the time, Smart was hurt by the fact that negotiations initially lagged for as long as they did. But now it's water under the bridge for the four-year guard, who took the time to thank each Celtics player, coach and executive at Media Day on Monday for attending his mother's funeral service and for the overall support from the organization.


"There's no bad feelings between me and the organization," Smart explained. "I knew coming in this was a business, you know? Sometimes we kind of overlook the business side because we build a relationship personally with certain people, certain organizations, certain teams. But at the same time it's a business and they were just doing their business part, just like I was.

"We came to an agreement and I'm back. I love Boston and Boston loves me. To see those guys show up at the service was actually a surprise to me. I didn't think anybody was gonna show up besides Brad, who I knew was coming and a couple of other coaches. My teammates Al [Horford], Terry [Rozier], Jaylen [Brown], Daniel Theis, Semi and those guys showing up and not alone those guys but Wyc [Grousbeck] and everybody else show up. It meant a lot to me and my family and that just shows how much this organization, as a family, cares for one another."