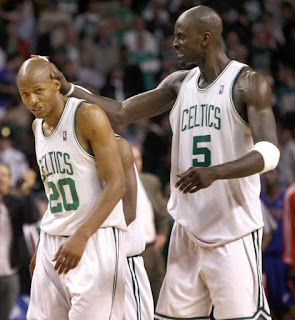 It's been six years since Kevin Garnett stated that he deleted Ray Allen's phone number. The two former teammates haven't spoken to each other since.

For KG, Allen's move from Boston to Miami still stings. Last year, members of the 2008 championship team reunited on Garnett's Area 21 show, where they all took turns explaining why they still hold a grudge for the manner in which Allen left the Celtics.

However since then, guys like Paul Pierce and Kendrick Perkins have vindicated the Hall-of-Fame shooter. And it appears that Garnett is slowly heading into the same direction.

Garnett posted a Doc Rivers quote from earlier this week when he said if he had to pick one team to win a game for his life, it would be the 2008 Celtics. KG tweeted "UBUNTU" -- a team philosophy the group lived by based on togetherness and making sacrifices for one another -- and posted an image of Rivers' quote alongside pictures of Allen and Garnett together.


It was a subtle salute, but an acknowledgement by Garnett on the same day of Allen's induction into the Basketball Hall-of-Fame. It's a sign of the two eventually mending fences much like Pierce and Perkins have already done.

Pierce posted a picture of him and Allen in China last summer and said the two buried the hatchet, then came Perkins, who posted a congratulatory Instagram post Friday afternoon before the ceremony.


At the end of the day, Allen's decision was predicated on the direction the Celtics were heading in -- one that would see Rondo lead an aging core attempting to put together one final championship run. When Allen was asked to come off the bench after Allen complained to coach Rivers that Rondo wasn't giving Allen enough touches on offense, it was the beginning of the end.

One could argue the manner in which Rivers handled the situation was questionable. However, at the time Rondo was performing at an extremely high level, en route to the best season of his career before an ACL injury derailed the C's run and ultimately brought the Big 3 era to a close.

Also, Allen's name was mentioned in so many trade rumors that when it came time for him to pick between returning to Boston or playing for the Heat, not money nor a no-trade clause from the C's could convince him to stay. He took less money from Miami in a reduced role over playing alongside Rondo.

This may very well be Garnett's way of letting Allen know that time does heal wounds or just his way of paying respect to one of the best teammates he's ever play with.