Marcus Morris says Celtics have best bench in the league 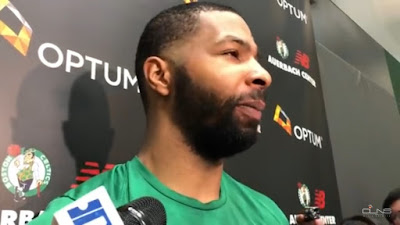 When the Celtics season came to an end the night of Game 7 against the Cavs last year, Marcus Morris was skeptical about his future in Boston.

The return of Kyrie Irving, Gordon Hayward and Daniel Theis meant Morris would return to the reduced role he saw throughout most of the regular season. "I'm not 100 percent sure where I fit," Morris said in the Celtics locker room following the series-clinching loss.

Throughout last year's playoff run, Morris emerged as one of Brad Stevens' most reliable options off the bench. He averaged 12.4 points and 5.4 rebounds in 19 games throughout the postseason and provided defensive flexibility in the front court as a guy who could defend multiple positions.

For a championship contending team, there's always room for a player like Morris. However, at the time he was wearied by the devastating loss by the hands of LeBron James and the Cavs, which disallowed him to see the bigger picture of what lied ahead.

Still, the summer was good to Morris. It gave him plenty of time to see things clearly, digest everything that had happened last season while looking ahead to this year and how he could find a way to embrace not only his role, but the Celtics' second unit as a whole.

He came up with "BWA" -- a campaign to label the second unit that stands for "Bench With Attitude." Morris originated the label, he told reporters after his team wrapped up their second day of training camp. He then went on to explain how uncommon it is for a team to have so many options off the bench and according to him, the depth of the Celtics' second unit -- led by him, Marcus Smart and Terry Rozier, is unmatched.


"We're all veterans," Morris explained. "We have a unique situation to have as many guys as we have. For us to do what we're supposed to do I think that can change a lot of games because once our second unit comes in I don't care who they got on their team, there's no second unit that's better than ours from top to bottom."

Before last year, Morris had never been past the first round let alone a run that ended minutes away from the NBA Finals. The taste of a deep playoff run has made a lasting effect on him, and whether he starts or comes off the bench, there's no other place he rather be at this stage of his career.


"Our team is special," Morris said. "There's going to be some games where I start, there's going to be some game, well most games, where I'll come off [the bench]. I'm just blessed to be in this special situation where we can actually get somewhere. We're probably right there to get the championship. We're the best team in the east so for this time in my career, I'm in a great situation.

"I'm blessed to be here. Boston has been nothing but great to me. I'm excited."

Morris is in a great place. From opening up to ESPN's Jackie MacMullan about his recovery from anxiety and depression to becoming a father for the first time, Morris knows this is a memorable time in his life and opened up about the significance of fatherhood and what it means to him.


"It's special, man. It's different," Morris explained. "You know I never had my father growing up so I never really knew that type of love. The love that I have for my son is unmatched. I enjoy seeing him every day I go home and when I'm out here I'm thinking about him so it's special. I'm excited to see him grow up, looking forward to that more."

While some have projected the Sixers as the Celtics' biggest threat in the Eastern Conference, Morris believes the Raptors will be Boston's most challenging opponent in the east. He also mentioned the Pacers as his sleeper team but is still very confident his team will top the conference in what he says will be a dogfight in the east.