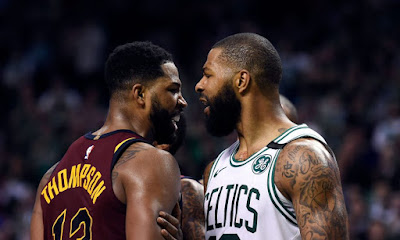 LeBron James isn't walking through that door for the Cavaliers this season, but that hasn't changed center Tristan Thompson's opinion on which team is projected to win the east.

It didn't take long for Celtics forward Marcus Morris to catch wind of Thompson's comments and clap back with a clever response on Twitter.


😂😂😂😂😂 @RealTristan13 Cut it out. Get that vacation ready early this year fam! Ain’t shit going through the Cavs this year! #facts
— Marcus Morris (@MookMorris2) September 27, 2018


The leader of the Celtics' BWA crew is certainly embracing the trash talker role of the team. After stating there isn't another team in the east that will top the Celtics this year, he implied to Thompson that Cleveland won't be heading into the postseason next spring, let alone win the conference.

Trash talking before the start of preseason? This year already has the potential to become an entertaining eight (or so) months.