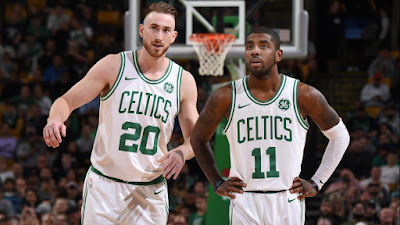 All-Stars Kyrie Irving and Gordon Hayward are expected to make their return to Boston next week and join some of their Celtics teammates for informal workouts and pickup games a month in advance prior to training camp.

According to the C's president of basketball of operations Danny Ainge, Irving (knee) and Hayward (ankle) have used the summer to rehab their injuries and are fully healthy for the upcoming season, as the team looks to make a run to the NBA Finals.


"I don't want to hype it up too much, but I'm saying that if our training camp were starting today that they would be here today going full speed," Ainge told ESPN on Monday. "It's not like they need an extra month. I think that they know they have an extra month, so they are sort of pacing themselves. They're playing as if to build up to that opening day of training camp."

The Celtics were on the brink of representing the East last spring when they took LeBron James and the Cavaliers to Game 7 of Eastern Conferance Finals without Irving and Hayward in the lineup.


"They'll both be here within the next week or so; by the time Labor Day is over, they will all be playing 5-on-5," Ainge said. "I think it's just a matter of, if they're not playing 5-on-5 now, then it's only because they want it more of a controlled environment, I guess. They're doing everything -- dunking the basketball off both legs and playing one-on-one live and jumping and cutting and defending. I'm excited for them."

Though everyone is excited about the Celtics having a fully healthy roster for the first time since opening night of last season, Ainge says the team will carefully integrate Irving and Hayward during camp and the start of the 2018-19 campaign.


"I'm really excited about the upcoming season with [Irving and Hayward]," Ainge said. "Obviously, there's a transition from rehabbing to playing one-on-one to playing 3-on-3 to 5-on-5 and then playing NBA basketball, so I don't want to build up expectations too high. I think there will be a little bit of an adjustment once that last phase is made.

"But physically, they look great, and I think they're very excited about the upcoming year."

The Celtics begin training camp on September 25, with pre-season set to tip-off three days later against the Charlotte Hornets.