Danny Ainge: 'Kyrie is very, very happy here in Boston, always has been' 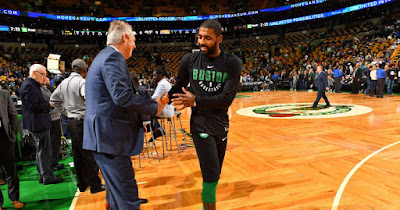 Celtics president of basketball operations Danny Ainge made it clear at training camp on Wednesday that he isn't concerned about Kyrie Irving's impending free agency.

Instead, he's looking forward to seeing his All-Star point guard return to form this season. Irving was a catalyst for the Celtics' successful 55-27 regular season record last year -- which led to home court advantage throughout the playoffs.

However, Ainge took the time to remind the media at the Auerbach Center of how Irving impacted his teammates off the floor while he nursed a season-ending injury. It's a big reason why he plans to keep Irving around for the long haul.


"Kyrie did a lot of good things like texting the players, he was the biggest cheerleader for Jaylen, Jayson and Terry, and Marcus and all those guys last year when he wasn't playing," Ainge explained. "But just having him on the court at the end of games is the thing I'm looking most forward to; having a guy who can beat switches, make shots, make lots of plays. He's a very special player."

While it may come as a surprise for most to see Irving open up to the media about his desire to commit with the Celtics long-term, it's didn't come as a shock to Ainge.


"I don't think [he's] ever changed his tune. I talk to Kyrie a lot. Maybe he's changed his tune with you, Abby," Ainge jokingly replied to NBC Sports Boston's Abby Chin. "But he has been very positive from the day he got here. I talk to Kyrie all the time and his representation. I think Kyrie is very, very happy here in Boston, always has been and I think that we'll hopefully make it a place he wants to stay much longer when the season ends."