Four things we learned from Day 1 of Celtics Training Camp 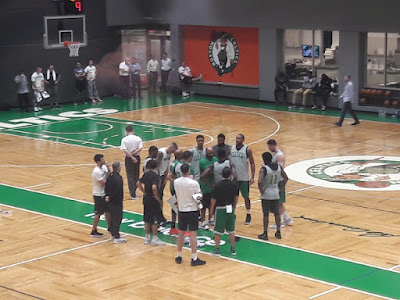 There were plenty of takeaways from the first day of Celtics training camp. The Celtics christened the brand new Auerbach Center practice facility with their first set of two-a-days on Tuesday, here are four things we learned about the 2018-19 Celtics:

Hearing Gordon Hayward didn't think twice when he dunked off his left foot during scrimmage was an encouraging sign. Head coach Brad Stevens thought it was such a significant moment for Hayward and the Celtics that he stopped play just to acknowledge Hayward in front of the rest of his teammates.

Oddly enough, it was something Hayward has never done. Stevens, who coached Hayward in college at Butler, explained.


"The little secret is he's never done that," Stevens said. "He's always been a right-foot jumper. I could probably count on one hand the number of times I've seen him jump off the left and dunk, anyways. But it was obviously a big deal for him."

Hayward, of course, still has ways to go before he can consider himself in "basketball shape." He talked about feeling fatigued throughout his first scrimmage of training camp.


"The first couple of trips up and down the court today I was a little winded," Hayward explained. "I think that's just being a little anxious just to play and everybody's going really fast in the first day of training camp but I felt for the most part I was pretty good."

There will be no minute-restriction for Hayward when he takes the floor on Friday in the Celtics' first preseason game against the Hornets.

Stevens has officially cosigned the "B-W-A" movement. The campaign to label the second unit -- a play on the iconic rap group, NWA -- with an acronym that stands for "Bench With Attitude." Marcus Morris coined the label at Media Day on Monday and since then it's created a buzz on the internet as merchandise and memes have already been rolled out days before the team's first exhibition matchup.

Guys like Morris, Marcus Smart and Terry Rozier are expected to lead the Celtics reserves -- something that Stevens jokingly mentioned was news to him in light of the projected starting lineup that most expect will consist of Irving, Hayward, Jaylen Brown, Jayson Tatum and Al Horford. When BWA was mentioned to Stevens in the media scrum he responded the same way most head coaches would react to the thought of second unit players embracing their secondary roles -- he said he loves it.


"I love that group," Stevens said. "Who knows how long things will stay that way but you've got a bunch of guys who have already proven they belong, already proven what they're capable of. One of the things we talked about yesterday was responsibility of all the players that are in at one time to play as hard as they can.

"There's no reason for us to have to get into a rhythm of a game because we got guys that will be itching to get in and that mindset off the bench will be really important."

Celtics rookie Robert Williams worked out with his new teammates on Tuesday but will not be participating in any scrimmages throughout camp. Williams, who has been dealing with knee tendinitis since the opening game of Summer League, participated in various workouts in camp but is expected to remain sidelined during 5-on-5 play.


"[He's] taking it easy on his first day of NBA practice," Stevens explained. "He did a ton this morning. We did 25 minutes of up and down running this morning, so there was a lot of extra work."

Williams will be available in Friday's preseason game against the Hornets.

Kyrie Irving's game-winning 3-pointer topped off an impressive first day of camp for the All-Star point guard. Gordon Hayward praised Irving for how good Irving looked throughout the day and then Irving reciprocated the same sentiments towards Hayward along with his young teammates.


"[They're] just so talented," Irving said. "Sometimes you can just throw them the ball and they'll get the bucket but also you just realize how smart they are as basketball players making plays. From the 2 and 3 spot, playing the 4, I'm excited to see even more of them."

According to Irving, he and Hayward are making up for lost times, he said, while also adding that he's been wanting to play with a two-guard of Hayward's caliber for a long time. Seeing Irving drain a buzzer-beating jumper is a sneak peak of what Celtics fans hope they'll see throughout the year, while Irving seems content with just being back on the floor competing with a group of talented guys that have made the beginning stages of his comeback season enjoyable.