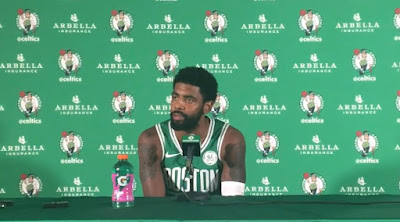 It's time to put an end to the "Kyrie Irving is going to leave next summer" talk.

The soon-to-be free agent spent Monday afternoon gushing over being a member of the Celtics. Even though it's been over a year since Irving was dealt to Boston as part of the most shocking move of 2017, the All-Star point guard has found a new level of comfort with his organization.

Irving greeted the media with a smile -- one that he didn't wipe off throughout most of his eight minutes at the podium.


"It's an exciting time," Irving said. "It's my eighth Media Day, which is scary. I'm still technically a kid but being with the guys again in this type of environment, which is high-level -- one of the highest levels I've ever been a part of -- just because of the amount of talent that we have around us. Our pickups have been unbelievable."

Irving was in a much different place one year ago. The controversial move that landed him in Boston made his first Media Day as a member of the Celtics a trying one.

The shadow of his former teammate -- LeBron James -- followed him from Cleveland as he did his best to comb through the difficult questions about his estranged relationship with his former teammate. However, this time was different.

Irving, who is coming off a season-ending surgery, will rejoin a loaded Celtics roster that has him anxious to start training camp. He spent the summer recovering from his knee surgery, working out with veteran guard Jamal Crawford and even got the opportunity to spend time with Celtics icon Bill Russell.

And now, with his health at 100 percent and one year removed from his first season in Boston, Irving says he's found peace.


"I'm finally in Boston for a year, not going through an emotional kind of roller coaster," Irving said. "I don't have to answer questions about the trade anymore, now it's like 'what's free agency like?' I'm just appreciative of the opportunity to finally be comfortable -- that's the biggest thing and I'm happy.

"It's settling, man. It's peaceful. I used to be nervous to come up here and talk to you guys cause I was wondering what you guys would ask me. At this point it's like, I really don't care."

For Irving, pre-training camp was a mental battle in trying to adjust to his new role with the Celtics. But he also wasn't completely healthy -- something we learned when the hardware that was placed in his left knee back in 2015 was nagging him throughout the regular season.

Now, he can honestly say his mind and body is at full strength as he approaches his second season in Boston.


"As long as your mind and body are on the same accord, you're pretty solid," Irving explained. "And last year it wasn't, it wasn't at all."

The success of his teammates -- a group that was one win away from reaching the NBA Finals --  is a testament to how much potential the Celtics have as they head towards a season full of high expectations. As for the youngsters, seeing the growth and will of his teammates has had a profound effect on Irving.


"Part of leadership is empowerment," Irving explained. "Really realizing how great some of these guys are and the potential of them. It's really special to have young guys that get it, they work hard, want it, they have vision, they have drive, they have commitment, they've sacrificed.

"They want to learn how to win and for the most part they know how to win because they've been taught by great leaders that we have with Brad [Stevens] and Danny [Ainge] and the organization in general. The history and tradition of what being a Boston Celtic is and what it means -- you're enriched in it."

Irving got a taste of Celtics history over the summer when NBA legend Bill Russell surprised him in Seattle.


"I came in the gym, I was warming up and then you just see Bill Russell walk in through the door and I was just like 'whoa, wow," Irving explained. "Talk about history. [For him to come] just to watch a pickup game, and Jamal [Crawford] put it together, and him there and getting the chance to talk to him; he's eccentric, if you've ever gotten a chance to talk with him. He's as cultured as they come, as great of a personality, as knowledgeable and he's still doing it -- showing up and supporting the Boston Celtics.

He's a Celtic for life and I wouldn't be able to talk about the Celtics tradition without Bill Russell doing what he did and laying down a great foundation. That opportunity I'll remember for the rest of my life."

Irving is confident the Celtics can win it all this year. He told Jackie MacMullan days before Media Day that he believes the C's can beat any team in a best-of-7 series and it seemed to resonate with his teammates, including Jayson Tatum who echoed Irving's championship aspirations verbatim when he spoke to Celtics reporters on Monday.

In one year, Boston plan to go from future contenders to having a legitimate shot at knocking off the back-to-back champion Warriors. The gap between the two contending teams all of a sudden doesn't seem as wide as it did one year ago.

Still, Irving didn't want to get too ahead of himself. He reminded everyone that while the Celtics do, in fact, have the potential to reach the top this season, they still have plenty of work ahead of them before they can say the gap between them and Golden State is closed.


"We haven't closed it (the gap) at all at this point," Irving said. "All 30 teams are looking to go 82-0. I think we have the talent to compete with them (Warriors). Obviously, the quote of me saying, 'I feel like we can beat them in a best-of-7 series' -- I really do feel like that.

After hearing Irving talk about his leadership role, teammates and the franchise's legacy, it's hard to envision him wanting out of the situation he's in.