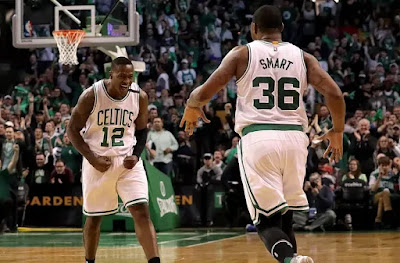 For those not pleased with Sports Illustrated's Top 100 NBA Players list for the start of the 2018-19 campaign from last week, where six members of the Celtics roster were ranked, here comes one more reason to debate another group of analysts.

ESPN.com has just revealed the bottom half of their own top 100 players in the National Basketball Association list [NBARank] for the upcoming regular season.

Here's what one ESPN judge had to say about Rozier's selection:


"Rozier stepped into the spotlight for the injured Kyrie Irving last season and saw sharp increases in PPG (10.1 to 15.6) and APG (2.2 to 5.3). During the postseason, only LeBron James scored more points in clutch time, and no player made more 3s. Irving will be back, but the confidence Rozier gained in the starting role should set the table for another successful season." — V. Johnson

Rozier finished with 28 clutch points in the postseason, second behind LeBron James' 47, while teammates Al Horford scored 27 and Jayson Tatum added 21 points in the clutch, according to NBA.com's advanced stats.

After filling in as a starter for the injured Kyrie Irving (knee) late in the regular season, where Rozier averaged 15.6 points, 5.1 assists and 1.2 steals per-game, he kicked it up a notch in the playoffs scoring 16.5 points, handing out 5.7 assists and forcing 1.3 steals per-game, all the way to a Game 7 against the Cleveland Cavaliers in the Eastern Conference Finals.

The "Scary Terry" moniker was born during the Celtics playoff run and Rozier has been enjoying his summer as a well-known celebrity, ready for another shot at an NBA Finals berth.

Rozier, who's 24-years old, is only going to improve on a championship contending Celtics team with arguably the NBA's best head coach in Brad Stevens.

It's interesting to note that Sports Illustrated also ranked Rozier at #82 on their list, just days ago.

However, Celtics guard Marcus Smart, came in at #55 on this year's ESPN's NBARank list.

The current longest tenured Celtic, inked a four-year, $52 million deal to remain in Boston and while it looked like a possible sign and trade scenario with a few teams (Brooklyn and Memphis) could have happened back in early-July, Danny Ainge made sure to bring back 'his guy.'

Smart, despite playing in only 54 games this past season, mostly due to a torn ligament in right shooting hand, still averaged 10.2 points (36.7 percent shooting from the field and 30.1percent from behind the arc), 4.8 assists and 3.5 rebounds per outing. Not to mention, his pesky defense, especially in the playoffs with his injury, that didn't prevent him from disrupting opposing players on a nightly basis.

Smart's impact was clearly noticeable when it came to the Celtics' team defense during the 2017-18 regular season, when opponents had an offensive rating of 101.7 points with Smart on the floor. When Smart was on the bench, that rating would climb to 106.3.

Also only 24-years old, Smart and teammate Rozier will look to lead the bench this season, as the duo's two-way play is an added bonus to the Celtics already deep roster.

Sports Illustrated did not rank Smart on their Top 100 list, below is a statement and reasoning behind the decision not to include the Celtics guard this year 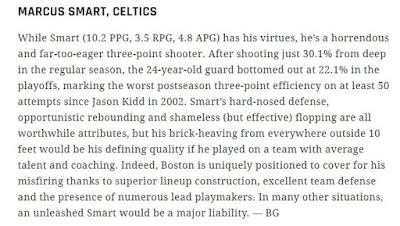