Kyrie Irving believes Boston can win a title this season, wants to be a part of the Celtics' future 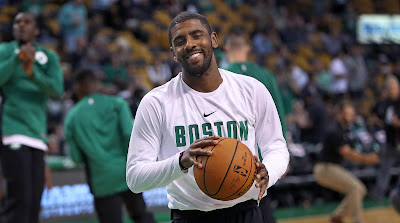 Kyrie Irving is preparing for what could arguably be the most important season of his professional career and while the rumors keep swirling around about his health or which city he'll take his talents to next summer, the Celtics All-Star seems like he's in great spirits these days.

ESPN's Jackie MacMullan caught up with Irving, as he spoke on a number of topics including his season-ending knee surgery last spring, that forced him to watch the Celtics deep playoff run from the sidelines.

Despite playing much of the 2017-18 season in pain, Irving was finally shut down in March and underwent two minor surgeries on the same knee he injured during the 2015 NBA Finals. The first surgery meant having a tension wire removed that he had in place for nearly three years.

Irving's second procedure in April, removed two screws from his left patellar tendon after a pathology test revealed a bacterial infection, which left him hooked up to an intravenous line for about six weeks.

The Celtics, who traded for Irving just over a year ago, were well aware of a required tune-up procedure on his repaired kneecap at some point, that just so happened to be the source of the guard's pain throughout this past season.

"We told them all about it," Irving confirmed. "It wasn't a surprise."

Irving has spent the better part of his offseason rehabbing and strengthening his left knee, as he believes his body is the strongest and healthiest it's been since the initial injury, three years ago.


"I'm moving completely differently," Irving told ESPN on Friday. "I've worked on my strength and have a heightened awareness of what my body needs on a day-to-day basis. I spent all summer trying get my left leg to catch up with my right. And it's there."

There seems to be no restrictions to his knee and if you have been paying attention to social media, where Irving was seen playing pick up in Miami with James Harden and Kevin Durant or dancing in the Bahamas with teammate Jayson Tatum, mobility has not been an issue.

In recent weeks Irving has been running scrimmages with his Boston teammates at the new Celtics practice facility; The Auerbach Center, located in Brighton, MA.

Irving's focus on his rehabilitation has clearly paid off and he is confident in how his body has reacted, which is something new to look forward to this season.


"Now when I go to the rim," Irving explained, "I'm able to maintain my strength and athleticism, so when I get under there I have all sorts of options. No limitations. I can pick my spots. It's a lot better."

When asked if he'd be disappointed if the Celtics did not win a championship this season, Irving responded.


"Can we beat Golden State in a seven-game series? Yes."

Irving was asked why he felt the way he did about the Celtics being able to dethrone the Golden State Warriors and he kept it pretty straight forward on his beliefs on what it takes to maintain a winning culture in Boston for years to come.


"Because of who we have," Irving answered, "and what we're establishing here, not just for this season, but for hopefully for the next few years, something that's pretty special.

"I've played against Golden State in three straight Finals (2015-17) -- two that I was able to participate in -- and seeing them evolve, with the talent they have, and then adding DeMarcus Cousins [this offseason], it's like 'OK, the whole league is on notice.'

"But there's one factor that they're aware of, and I'm aware of, and that's that I've seen them up close. I've played them so many times. We've gone in a seven-game series [when he was in Cleveland], so I know what it takes.

"Now, how do I communicate to our guys that this is the top-tier team, and we have to grow immensely in the next six months to beat them consistently? Not just one game, not just two, but in a seven-game series, because they're so dang great. They're a powerhouse."

Of course, when it came to talk about Irving's future, he didn't mince words on the subject of possibly wanting to team up with Jimmy Butler, who has been in the headlines this week after requesting to be traded out of Minnesota. Irving says he has not spoken to Butler about joining forces and hasn't really had any lengthly conversations with him since USA Basketball in the last summer olympics

As for not signing an extension this summer with the Celtics, where he'd leave more than $80 million on the table, Irving knows better, for the time being, to just wait instead until next July to re-sign in Boston if he so chooses to stay put.

"Well, there are financial implications involved.

"I'm accepting it's going to be a constant story," Irving shrugged. "It's a point in my professional career where it is a big-time decision. I've been away from Cleveland officially for a year now, and I'm finally getting acclimated in Boston.

"Last year it was almost like a trial. There was a lot going on. It was overwhelming at times, to be honest. The focus needed to be directed on getting better and helping my new team win a championship, instead of focusing on all the outside noise [regarding his departure from Cleveland] that affected me personally.

"I was afraid to admit that initially, because I wanted to be prideful and handle everything. So, it's been a matter of figuring it out and growing.

"It only affects me when it affects my teammates. I keep them abreast of everything. We need to be communicating like that, because there are very few years where you get a chance to be a championship team -- unless you are Golden State."

Irving acknowledges that the Celtics have a deep roster with many who play the same position, but he doesn't believe it will be a problem for his coach Brad Stevens when it comes to the team's ultimate goal this season.


"The drive for greatness, the drive to win a championship, that's all I care about," he said. "The rest of it doesn't matter."

The Celtics will have their media day on Monday and begin training camp on Tuesday, before the start of the preseason in Charlotte against the Hornets on Friday.