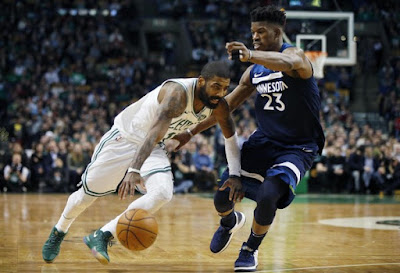 The news of Jimmy Butler wanting out of Minnesota shook the NBA landscape Wednesday evening, but what does the All-Star's trade request mean for the Celtics?

Butler, who will be finishing up the final year of his five-year, $92 million contract, is set to become a free agent next summer and has no intentions of sticking with the Timberwolves. Instead, the seven-year wing has reportedly given Minnesota a list of three destinations, a list of teams he wants to be dealt to and is willing to sign an extension with.

Although the Celtics are not one of the teams mentioned by Butler, the Knicks -- a team that has Celtics All-Star Kyrie Irving at the top of its 2009 free agency wish list -- are. The Brooklyn Nets and Los Angeles Clippers are the other two teams reportedly mentioned.

Irving, who will be a highly sough-after free agent next summer, will be considering his options next summer. The Celtics point guard hasn't made any verbal commitment to Boston and the thought of teaming up with Butler along with All-Star big man Kristaps Porzingis could be enough for the Knicks to pry him away from Boston.

Expect New York to, of course, do its due diligence to acquire Butler. However, according to Adrian Wojnarowski, sources say the Knicks aren't at the top of Butler's list.

Butler is most interested in joining the Clippers. Los Angeles, an organization that's spent the past year parting ways with its trio core of Chris Paul, Blake Griffin and DeAndre Jordan, are in full-blown rebuild mode and will have enough cap space to lock in two max-deal guys next summer.

The 2019 free agent pool is stacked with marquee names like Irving, Kevin Durant, Klay Thompson, DeMarcus Cousins, DeAndre Jordan and Kemba Walker, as Woj noted. The Knicks, much like the Clippers and Nets, also have enough cap space to bring in a top-tier free agent, but what separates New York from LA and Brooklyn is its All-Star talent in Porzingis -- a rising 23-year-old star who's years away from his prime.

However, when it comes to assets between the Knicks and Clippers, the Clips certainly have the edge over New York. Equipped with a blend of solid young and veteran players like Tobias Harris, Lou Williams and Patrick Beverley, the Clippers have pieces that can help the Timberwolves right away.

But from Minnesota's point of view, would it be worth bettering a potential conference rival in the long-run? Whereas sending Butler to the Eastern Conference to a team like the Knicks would slightly even the playing field in what is already a top heavy Western Conference stacked with superstars.

Still, finding the right deal for Butler will be a daunting task for New York. Joakim Noah's $18.5 million is weighing down its salary and offering guys like Courtney Lee, Lance Thomas or Emmanuel Mudiay isn't going to get it done.

New York is most likely going to have to find a third team in order to put together a packaged deal that will make it worth while for the T-Wolves. Either way, keeping an eye on how things unfold in the Twin Cities will be interesting for Irving and the Celtics.