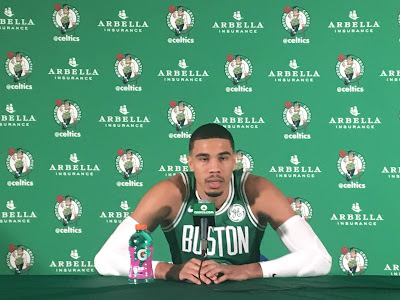 Jayson Tatum had a productive summer.

After finishing a rookie season that ended minutes away from the NBA Finals, Tatum spent the summer determined to improve his physique. He instead got something even better -- the chance to work with his idol.

Tatum received a lot of phone calls from players who wanted to work out with him in preparation for the upcoming season but when Kobe Bryant called, Tatum jumped at the opportunity to learn from the future Hall-of-Famer.


"Kobe asked me to work out," Tatum said with an ear-to-ear smile. "[He's] my favorite player so, he was at the top of the list."

Together they worked on Tatum's offense. His ability to attack the rim, absorb contact and finish strong was the primary focus but the two also connected on a personal level, according to Tatum and it was an experience he'll never forget.


"It was one of the cooler basketball experiences of my life," Tatum explained. "[He's] my biggest basketball inspiration and just to have the interaction with him on a real personal level, I mean, I still have to look at the picture to remind myself that it actually happened. But it was really helpful -- just to have that relationship."

One highlight of the Celtics' postseason run was when Tatum dunked over LeBron James in Game 7 of the Eastern Conference Finals -- which was just a preview of what's to come from the youngster as we see him grow before our eyes. Tatum acknowledged the improvement he made from the regular season to the playoffs.


"It's just something that I had to get better at through the course of the season," Tatum said. "I was a lot better at that during the playoffs than I was at the beginning of the season. This year I just had a lot of things to learn and adjust to and hopefully I'll be better this year than I was last year."

Now with the Celtics roster at full strength, Tatum understands that his second season will be much different than his rookie campaign but isn't worried about the changes or the rest of his teammates. In his eyes, winning exceeds all the other obstacles.


"Everybody's gonna have a different role," Tatum explained. "Just with the loaded roster that we have, everybody has to play, we have a lot of talented guys. But we have a lot of coach-able guys that are willing and know what it takes to win. That's all that we care about. Winning takes care of everything, as long as we win, that's all that matters."