Draper: Celtics definitely have a shot at winning 2019 NBA Finals 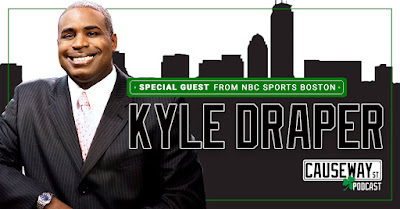 While most project the ceiling for the 2018-19 Celtics to end in representing the Eastern Conference in the NBA Finals, NBC Sports Boston reporter Kyle Draper is giving Boston a legitimate chance against the back-to-back champion Warriors.

Assuming the defending champs will top the Western Conference and take on the Celtics in the finals, Draper doesn't believe the heavily favored Warriors are a lock to go for the three-peat. Instead, he sees the hypothetical series going the distance and reminded hosts Josue Pavón, Sean Dutra and Joel Pavón during his appearance on the Causeway Street Podcast of last year's Western Conference Finals as an example of just how vulnerable Golden State can be.


"They definitely have a shot," Draper said. "If they meet in the finals, I have it going six or seven games. Think about it, the Warriors were on the ropes against Houston. Houston should have advanced in that series so the Warriors are definitely beatable."

The DeMarcus Cousins signing was easily the most shocking headline of the summer. Golden State inked one of the league's elite big men to a one-year, $5.3 million contract -- adding another perennial All-Star to a roster already stockpiled with top-tier talent.

But when it comes to depth, host Josue Pavón gives the edge to Boston and Draper shared the same opinion, pointing to the youngsters Jayson Tatum and Jaylen Brown as two players that can make all the difference in a best-of-7 series.


"It'll be interesting to see when Cousins comes back," Draper said. "Do they continue to roll? When you look at the Warriors' roster, I could argue that three of the top four players [between the Warriors and Celtics] are on the Warriors' team. I think you're right about the depth. To me it's going to be guys like Tatum, Brown -- what kind of contributions they can make on the biggest of stages.

"I have no concerns about guys like Kyrie [Irving] and Gordon [Hayward] or even Al Horford. The young guys are gonna have to step up."

The Cousins signing crushed most Celtics fans -- they saw it as a devastating blow to Boston's chances of winning it all. However, Draper isn't sure Cousins' transition into the fold will be as smooth as most anticipate.


"The thing about the Warriors, guys is their offense is predicated on quickness and ball movement," Draper explained. "Take DeMarcus Cousins playing that style or when he comes in he's gonna slow it down. I could see a lot of times DeMarcus Cousins not even crossing half court. The Warriors play so fast, they're gonna get out there and run and put up the first open look they get.

Click the link below to listen to Kyle Draper's conversation in its entirety.