Gordon Hayward makes his return to an NBA court 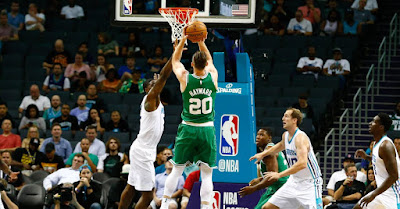 Gordon Hayward returned to NBA play for the first time since the opening quarter of the 2017-18 Celtics season, last Oct. 17, when he broke his left tibia.

Hayward, who was greeted to a standing ovation in Chapel Hill, North Carolina prior to tip-off against the Hornets, earned his first bucket of the night on a put-back off of a missed layup by Jayson Tatum in the opening quarter of the night. He finished with 10 points, three rebounds and one assist in just over 22 minutes.


"Definitely good to get that one out of the way," Hayward said. "Didn't feel like I played my best basketball, but I was having fun out there and it was good to be back with the guys. Definitely had some good moments, some bad ones."

Hayward also facilitated the offense throughout the first quarter as the Celtics were solid in their ball movement before Brad Stevens went deep into his bench for most of the second half.


"I've been through a lot this past year, so just to be out there in front of the fans, playing with my teammates, there were moments that I didn't know if I was going to be able to do that. So, that was definitely a win," Hayward said.