Kevin Garnett sues accountant, firm for the theft of $77 million 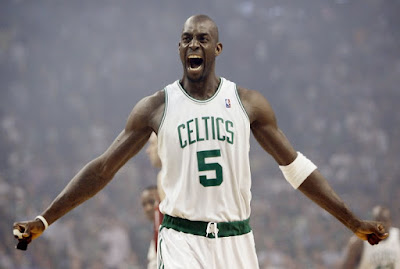 Kevin Garnett is suing a financial advisor and his firm for allegedly helping a certified public accountant, who worked with the advisor, steal $77 million from the former Celtic over many years and did nothing to stop the flow of money.

According to ESPN, who first broke the story on Thursday night, the federal malpractice lawsuit alleges Kentucky-based accountant Michael Wertheim and the firm Welenken CPAs let Charles Banks IV of Atlanta commit fraud in Garnett's name through businesses in which the former All-Star and Banks shared.

The lawsuit documents state that Wertheim "possessed actual knowledge that Banks was helping himself to millions of dollars of Garnett's money and did nothing about it."

"Banks intentionally ... looted Garnett of his earnings and assets for many years, including the many years that Welenken and Wertheim provided accounting services to Garnett and his business interests," according to the lawsuit, which was initially filed in a Minnesota district court, but got moved Wednesday to federal court in Minneapolis.

Defense attorney Greg Simpson told the Star Tribune his clients deny the allegations made by Garnett and will "vigorously" fight the suit in court.

In 2017, Garnett learned that he lost millions of dollars only after his former financial adviser, Charles Augustus Banks IV, was sentenced to four years in a federal prison for stealing money from NBA great and future Hall-of-Fame center, Tim Duncan.

In one of Duncan's deals with Banks, the former San Antonio Spurs star said he was told Garnett would be a partner.

Between Garnett and Duncan, Banks allegedly made off with $100 million in cash, which about only $7 million has since been repaid to Duncan by Banks, according to federal court records.

Last month, the federal appeals court upheld Banks' conviction. He is currently serving his sentence at the FPC Montgomery in Montgomery, Alabama. However, Banks has not been named as a defendant in the lawsuit.

Garnett's attorney, Mark Gaughan, would not comment on why Banks was not named in the lawsuit, but did say he was confident in a positive outcome of his client's case.


"Based upon the facts, we are confident this matter ultimately will be resolved in Mr. Garnett's favor," said Gaughan.

The lawsuit claims Wertheim prepared financial statements, added his name to bank accounts holding Garnett's money, while he also "took direction from Banks and for some reason chose to have virtually no contact with Garnett."

Garnett, a 15-time All-Star, retired with the Timberwolves in 2016.